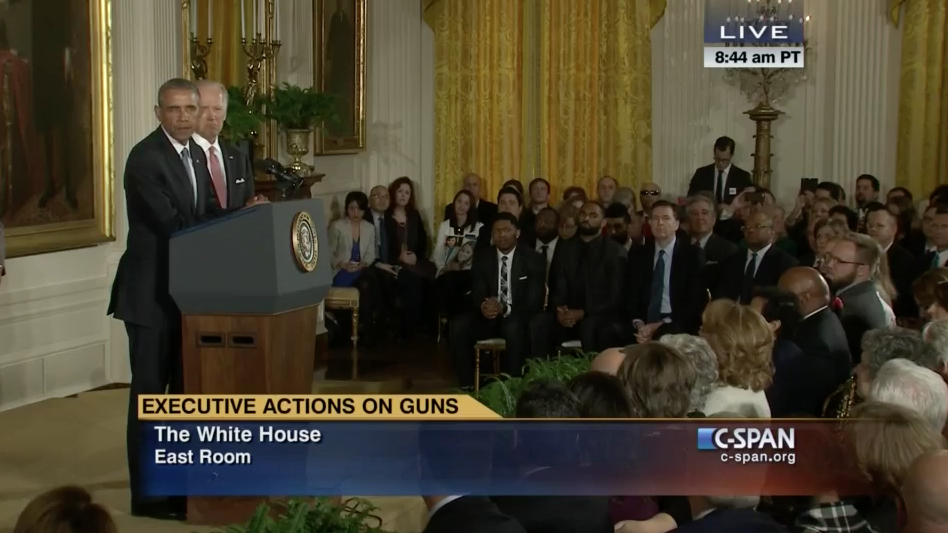 Here are some false claims from Obama’s address yesterday.  Amazingly, even though Obama is engaged in obvious cherry-picking of facts and examples, the ones that he brings up are wrong.  The quotes from his address are indented and in italics.

“Not even close”?  Response here and here.  France had three mass public shootings last year, while the US had four.  That isn’t even accounting for the huge differences in population.

Contrary to the claims of what some gun rights proponents have suggested, this has not been the first step in some slippery slope to mass confiscation.

As laws concerning handguns and “assault” weapons have evolved, such places as California, New York, and Chicago have all used registration lists to identify who owns guns that are no longer legal.

Since 2004, Congress has required the FBI to destroy NICS records of gun sales and transfers within 24 hours. But federally licensed dealers are required to keep records of background checks. Congress currently forbids federal collection of this information into a central database, but there’s no guarantee that this won’t change. The government could potentially figure out who legally owns a gun.  When 5 or 10 years have gone by a future president could simply require that federally licensed dealers copy their 4473 forms for all these transfers and sales and turn them into the federal government and you would have an instant national registration list.

The problem is some gun sellers have been operating under a different set of rules. A violent felon can buy the exact same weapon over the Internet with no background check, no questions asked. A recent study found that about one in 30 people looking to buy guns on one website had criminal records — one out of 30 had a criminal record. We’re talking about individuals convicted of serious crimes — aggravated assault, domestic violence, robbery, illegal gun possession. People with lengthy criminal histories buying deadly weapons all too easily.

The rules for gun dealers selling guns over the internet are the same as them selling them from their stores.  If you try to buy a firearm over the Internet from a licensed firearms dealer, you have to go through a background check, period. They’ll ship the gun to your nearest licensed dealer. There’s no loophole there.  If you buy from a private individual, there is still nothing unique about the rules for the internet.  If you want to buy a gun online from any seller in another state, they can’t just mail the gun to your doorstep. The Gun Control Act of 1968 strictly regulates direct mail of virtually all firearms across state lines, the only exception is for antiques. Again, the seller has to ship the gun to a federally licensed dealer.

The one in 30 claim is based on data that appears to see if people with similar names have criminal records.

The law is actually quite clear on those who have to get a federal firearms license: “a person who devotes time, attention, and labor to dealing in firearms as a regular course of trade or business with the principal objective of livelihood and profit through the repetitive purchase and resale of firearms, but such term shall not include a person who makes occasional sales, exchanges, or purchases of firearms for the enhancement of a personal collection or for a hobby, or who sells all or part of his personal collection of firearms.”  Yet, Obama’s rules will cover people who sell as few as one gun.  How one reconciles that with the language of the statute is a mystery.

Congress actually voted to make it harder for public health experts to conduct research into gun violence; made it harder to collect data and facts and develop strategies to reduce gun violence.

That is a myth.

No, 90% of Americans did not support the actual Machin-Toomey legislation (here and here).

Congress actually voted to make it harder for public health experts to conduct research into gun violence; made it harder to collect data and facts and develop strategies to reduce gun violence.

That is a myth.

I believe in the Second Amendment. It’s there written on the paper. It guarantees a right to bear arms. No matter how many times people try to twist my words around — I taught constitutional law, I know a little about this — (applause) — I get it.

In fact, back in 1996 President Obama told John Lott that he didn’t believe that people should be able to own guns.  And indeed during the 1990s Obama supported all sorts of gun bans.

We know we can’t stop every act of violence, every act of evil in the world. But maybe we could try to stop one act of evil, one act of violence. Some of you may recall at the same time that Sandy Hook happened, a disturbed person in China took a knife and tried to kill — with a knife — a bunch of children in China, but most of them survived because he didn’t have access to a powerful weapon.

Guns are indeed more dangerous, but they also are better at protecting people.  In any case, this is quite some cherry-picking of data.  There have been lots of deadly knife attacks in China.

Today, many gun injuries and deaths are the result of legal guns that were stolen or misused or discharged accidentally. . . . We need to develop new technologies that make guns safer. . . . we’re going to work with the private sector to update firearms technology. . . . a product that now kills almost as many Americans as car accidents. . . .

Can safety regulations do for guns what they have done for cars? See: Are guns “more likely to kill you than a car is”? No

In an example of cherry picking numbers, the president doesn’t use the data from the most recent year 2014.

A note on Obama’s claim about how easy it is for a teenager to obtain a gun
CPRC on Turkish Television discussing Obama’s executive actions on Guns: What passes for “debate” by some gun control advocates
President Obama and Michael Bloomberg meet in White House to discuss the Executive Actions Obama is Planning