The Bloomberg School of Public Health at Johns Hopkins University put out this press release on a paper by Rudolph, Stuart, Vernick, and Webster:

A 1995 Connecticut law requiring a permit or license – contingent on passing a background check – in order to purchase a handgun was associated with a 40 percent reduction in the state’s firearm-related homicide rate, new research suggests.

Researchers from the Johns Hopkins Center for Gun Policy and Research, part of the Johns Hopkins Bloomberg School of Public Health, compared Connecticut’s homicide rates during the 10 years following the law’s implementation to the rates that would have been expected had the law not been implemented. The large drop in homicides was found only in firearm-related killings, not in homicides by other means, as would be expected if the law drove the reduction.

The findings are published online June 11 in the American Journal of Public Health. . . .

Earlier research from Webster found that Missouri’s 2007 repeal of its handgun license law was associated with a 25 percent increase in its firearm homicide rates. . . .

It makes little sense to examine one state when ten states had have laws at least at some time requiring licensing (Hawaii, Illinois, Iowa, Missouri, Massachusetts, Michigan, Nebraska, New Jersey, New York, North Carolina, and the District of Columbia) and others have expanded background checks. Missouri and now Connecticut involves cherry picking.  The Missouri study is discussed here.  And Massachusetts serves as a strong example of why not all states are examined.  Connecticut serves as the strongest evidence that gun control advocates can point to but, as we will see, this evidence is very weak.

As the authors of the study note,  from 1995 to 2005 the firearm homicide rate in Connecticut indeed fell from 3.13 to 1.88 per 100,000 people, representing a 40% drop over a ten-year period (“We estimate that the law was associated with a 40% reduction in Connecticut’s firearm homicide rates during the first 10 years that the law was in place“).  However, unexplained is that the firearms homicide rate was falling even faster immediately prior to the licensing law.  From 1993 to 1995, the Connecticut firearms homicide rate fell from 4.5 to 3.13 per 100,000 residents, which means more than a 30% drop in just two years. This represented a greater decline than the 17% national decline over those two years.  Of course, Rudolph and his co-authors do not address this inconvenient fact (though if one looks at their Figure 1 on page 3 this preceding drop is clearly visible).

The authors say that they limit the data to 2005 because one paper that they cite looked at only 10 years after a law that they were investigating (p. 4: “We conclude the post-law period in 2005 to limit extrapolation in our predictions of the counterfactual to 10 years, as has been done previously“).  But just because a study on to cigarette smoking looks at 12 years (not 10 as claimed (Proposition 99 went into effect on January 1, 1989 and their sample went until 2000)) after the law was in effect, doesn’t explain why a study on crime would do the same thing.  Indeed, the reason given by the authors that Rudolph et al. cite isn’t applicable to the current paper (p. 16: “It ends in 2000 because at about this time anti-tobacco measures were implemented across many states, invalidating them as potential control units“).  There was no similar adoption across the states of handgun licensing laws.  Yet, if Rudolph et al. had gone for this 12th year as the study that they cite does, it would have dramatically altered their results. 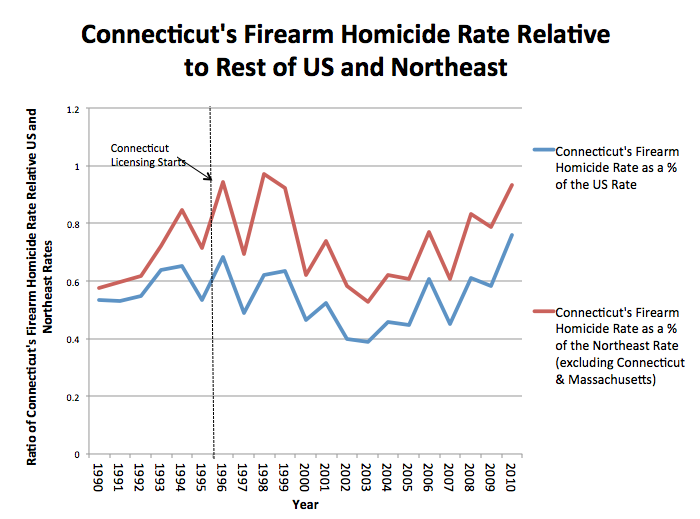 The same graph for next door Massachusetts shows how bad things were after their 1998 gun licensing law went into effect and why they picked Connecticut with all the arbitrary years that they examined. 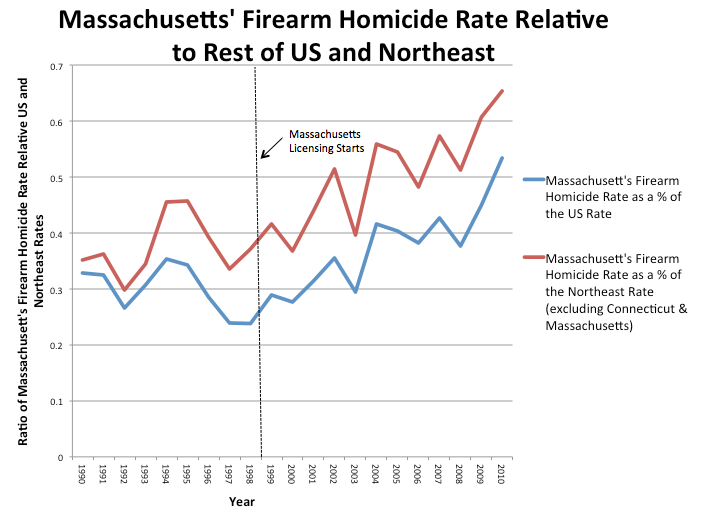 The Webster study also cherry-picks what crime rates to look at.  For over all violent crimes as well as robbery and aggravated assault, Connecticut’s crime rate was falling relative to the rest of the US in the years prior to the licensing law and rising afterwards.  For murder, there is basically not change in trends before and after the licensing law.  While 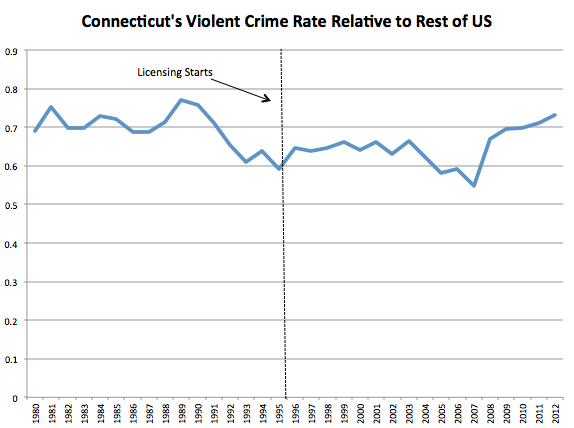 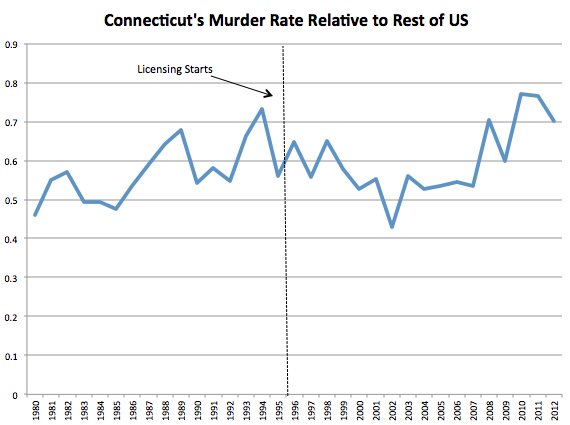 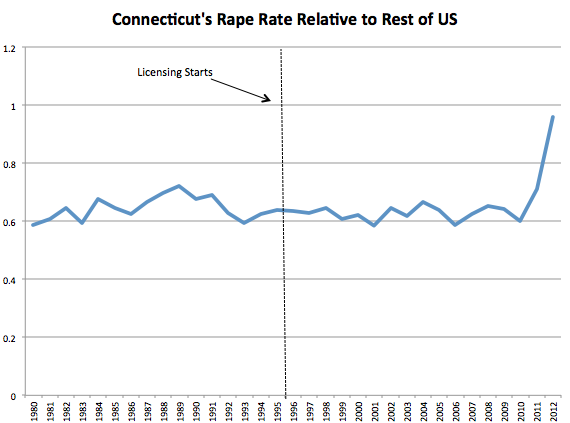 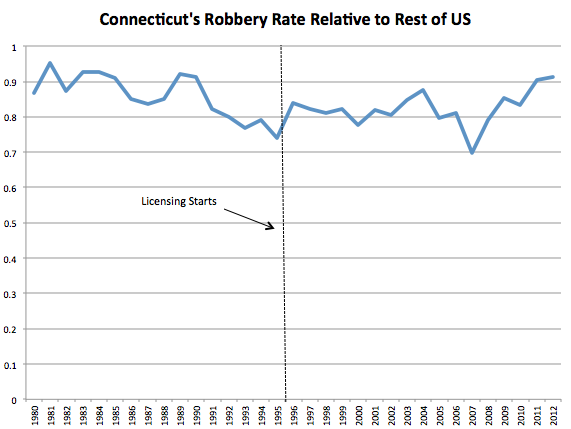 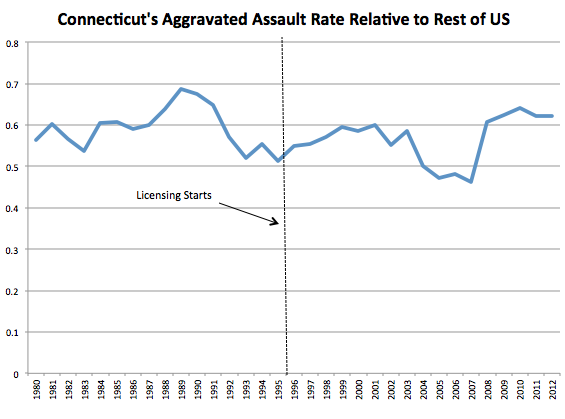 Here are the two states that  Rudolph et al claim are the best matches to create their synthetic Connecticut.  Just because there were some states that could be combined using historical data to match the changes in Connecticut’s doesn’t mean that you expect them to continue to predict future changes.  As a comparison, suppose that you found five stocks that when combined closely matched the changes in Apple stock over the last year, would you want to bet that those stocks would closely match changes in Apple’s stock over the next year?  Just because you had a historical relationship that matched the changes over the last year, it wouldn’t tell you very much what would happen next year.  The same thing with states, just because Nevada or California firearm homicides just happened to move with Connecticut’s over the years from 1984 to 1995, why you expect the political, police, economic, demographic, and other changes to cause their crime rates to change the same way from 1996 to 2005.

UPDATE: Here is the firearm homicide data up through 2015. 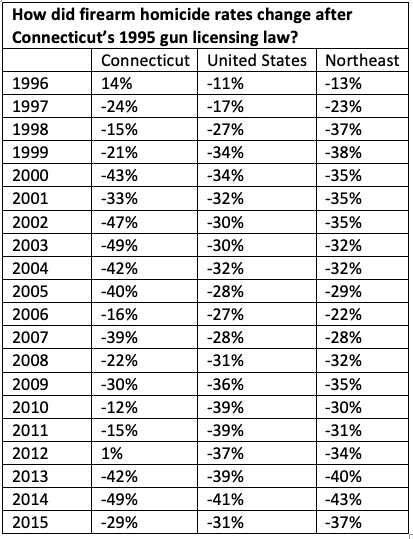 UPDATE: Apparently timed with the release of the Bloomberg study, the two Connecticut US Senators and a couple of congressmen from other states have put out a bill in favor of national licensing of guns (see also here and here). 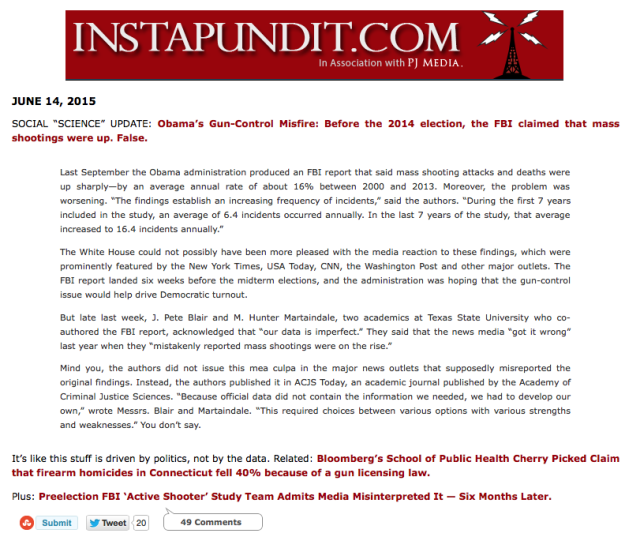