Are guns “more likely to kill you than a car is”? No

The Economist magazine had the headline in mid January: “A gun is now more likely to kill you than a car is.”  It is a claim that has been repeated over and over again (see Forbes, The Atlantic, Slate (question 9), Vox (also at MSN News), RT, college newspapers across the country, Mother Jones, Raw Story, Oregonlive.com, Tucson Sentinel, and related pieces in the Washington Post). From The Economist article:

ACCORDING to data gathered by the Centres for Disease Control (CDC), deaths caused by cars in America are in long-term decline. Improved technology, tougher laws and less driving by young people have all led to safer streets and highways. Deaths by guns, though—the great majority suicides, accidents or domestic violence—have been trending slightly upwards. This year, if the trend continues, they will overtake deaths on the roads. . . .

Comparing the two national icons, cars and guns, yields “a statistic that really resonates with people”, says Chelsea Parsons, co-author of the report for the Centre for American Progress. Resonance is certainly needed. There are about 320m people in the United States, and nearly as many civilian firearms. And although the actual rate of gun ownership is declining, enthusiasts are keeping up the number in circulation. Black Friday on November 28th kicked off such a shopping spree that the FBI had to carry out 175,000 instant background checks (three checks a second), a record for that day, just for sales covered by the extended Brady Act of 1998, the only serious bit of gun-curbing legislation passed in recent history.

Many sales escape that oversight, however. Everytown for Gun Safety, a movement backed by Mike Bloomberg, a former mayor of New York, has investigated loopholes in online gun sales and found that one in 30 users of Armslist classifieds has a criminal record that forbids them to own firearms. Private reselling of guns draws no attention, unless it crosses state lines. . . .

Here is the letter that we submitted:

Compare similar categories.  While 99.4% of car deaths arise from accidents in 2013, that percentage is only 1.5% for guns.  64% of gun fatalities are suicides.  If increased safety regulations are the solution, why is it that between 2000 and 2012 accidental deaths from cars fell by 18% and those from guns by 35%?

Gun deaths are rising because there has been a 28% increase in firearm suicides.  But non-firearm suicides increased even faster (56%) –something is causing suicides generally to rise.

Despite your claim, domestic violence simply doesn’t account for a large share of gun deaths — only 3% of gun deaths in 2012 involved murders of immediate or extended family members.

The regulations you mention do real harm.  About 99 percent of background check denials under the Brady Act are false positives, not criminals.  Some denials mean people can’t defend themselves.

As for gun deaths for 15-24 year olds, most involve gang fights.  One solution: Try legalizing drugs.

The claim that total automobile deaths have fallen relative to firearm deaths can be seen in this figure, though it is also clear that the drop occurred during the recession of 2008 and 2009 (part of that drop is due in part to some reduction in driving). 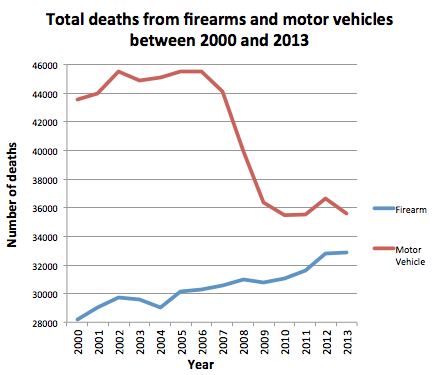 The types of deaths by cause show that auto accidents are overwhelmingly accidental deaths and those by firearms are suicides. 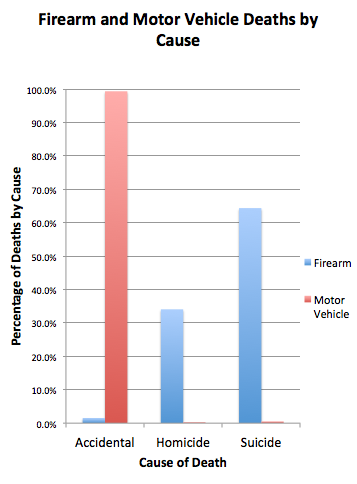 There are two problems with the claim that regulations are responsible for the drop in accidental motor vehicle deaths .  First, virtually the entire drop occurred in two years during the recession (2008 and 2009) and it is hard to think of any new regulations that would produce such a sudden and large drop (most regulations would have a gradual impact over time has new cars with those features made up a greater and greater share of the cars on the road).  Most likely the drop occurred because of changing driving habits (such as some reduction in how much people drove).  It is because of this point that we are unlikely to see firearm deaths exceed motor vehicle deaths in 2015. 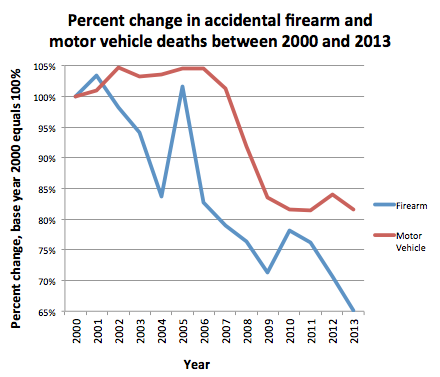 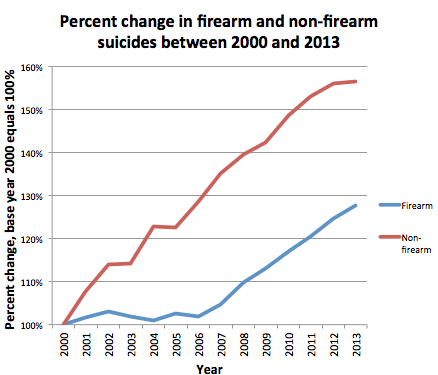 If we had space in the letter, there were other errors in their article that could have been included.  For example, the article claims that “the actual rate of gun ownership is declining” is presumably based on one survey — the General Social Science survey.  The GSS survey is the outlier in terms of gun ownership rates.

← CPRC on Frank Beckmann's Show on WJR, the coming anti-gun push from Bloomberg Two burglars were thwarted by a University of Central Florida student with a gun →