UPDATED: How mass killers pick out venues where their victims are sitting ducks

Updated June 1, 2019: At some point, you would think that the empirical evidence would be overwhelming. When the Aurora, Colorado Batman movie theater shooter attacked, there were seven movie theaters showing “The Dark Knight Rises” on July 20th within 20 minutes of the killer’s apartment at 1690 Paris St, Aurora, Colorado, but the killer picked the only theater that had signs posted that it was a gun-free zone. His first target had been an airport but he worried about their “substantial security.” Similar stories have occurred at malls such as in Omaha and Salt Lake City or the Lafayette, Louisiana movie theater. Despite teachers carrying guns in schools in 20 states, all the shooting attacks at schools have occurred in schools that ban teachers from having guns.

Given that people are allowed to carry their permitted concealed handguns in the vast majority of public places, if these mass public shootings were random, 95% or higher of these attacks would take place in areas where permitted concealed handguns were allowed. Instead the reverse is true, with 98% of those attacks taking place where general citizens are banned from having guns.

At some point, it would seem obvious that these attacks aren’t random. The links below provide some information that these mass public shooters do consider this information when engaging in their attacks. A more detailed discussion is available in Dr. Lott’s book, The War on Guns.

Original: Vince Vaughn explained what should be obvious to most people in an  interview in the UK edition of GQ:

“It’s well known that the greatest defence against an intruder is the sound of a gun hammer being pulled back. All these gun shootings that have gone down in America since 1950, only one or maybe two have happened in non-gun-free zones. Take mass shootings. They’ve only happened in places that don’t allow guns. These people are sick in the head and are going to kill innocent people. They are looking to slaughter defenceless human beings. They do not want confrontation. In all of our schools it is illegal to have guns on campus, so again and again these guys go and shoot up these f***ing schools because they know there are no guns there. They are monsters killing six-year-olds.”

Media Matters then attacked Vaughn by pointing to a flawed report by Bloomberg’s Everytown, but of course, Media Matters doesn’t respond or even acknowledge all the errors that have been previously pointed out with Bloomberg’s report.  See also here.

Killers often openly talk about their desire to attack where no one is there with a gun to stop them.

UPDATE, ADDED EXAMPLE: In the planned Church attack in Detroit, the person planning the attack note one reason to picking his target:

“Plus people are not allowed to carry guns in church.” . . .

“I don’t think the church was his primary target because he told us he was going for the school,” Scriven said Friday. “But I think he couldn’t get into the school because of the security … so I think he just settled for the church.” . . .

Last June, Elliot Rodger, who killed six people in Santa Barbara, Calif., explained his own choice. In his 141-page “Manifesto,” Rodger turned down targets because he worried that someone with a gun would cut short his killing spree.

That same month, Justin Bourque shot to death three people in Canada. His Facebook page made fun of gun-free zones, with pictures of defenseless victims explaining to killers that they weren’t allowed to have their guns.

This past week we finally got a look at the diary of the Batman movie theater killer, James Holmes, and it was clear that he was considering both attacking an airport and a movie theater.  But he turned down the airport option because he was concerned about their “substantial security.”  Beyond that, only one of the seven movie theaters near the killer’s apartment had posted signs banning permitted concealed handguns and that was the theater that Holmes picked to attack.

In February 2016, there was another planned mass public shooting on one of the largest churches in the Detroit area that the FBI stopped.  Their recording of this individual’s phone calls is chilling: “It’s easy, and a lot of people go there. Plus people are not allowed to carry guns in church. Plus it would make the news.“

Of course, there are numerous other examples such as the Columbine killers opposing the concealed carry law that was then working its way through the state legislature.  The Majority leader of the state House at the time, Doug Dean, told John Lott that Klebold had written his state legislators opposing the legislation.  The bill would have allowed people to carry permitted concealed handguns on school property.  The killers timed their attack for the very day that final passage of the law was planned for in the legislature.  (Dr. Lott had been brought into Colorado by Dean to talk to legislators the morning of the vote, and was flying back to Chicago when the attack occurred.)  Their attack derailed the passage for years, but few talk about the fact that their attack was timed for just hours before the final vote. 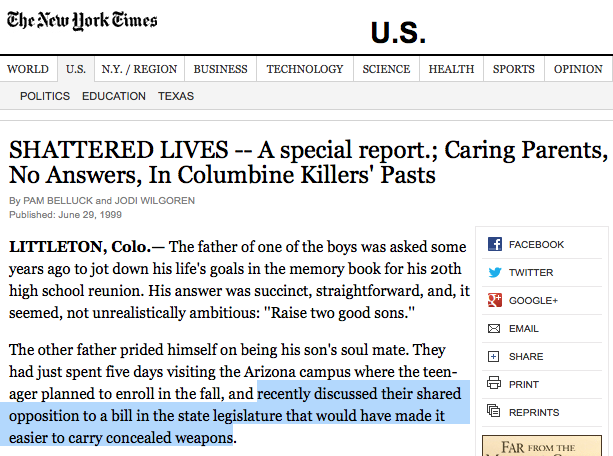 For those interested, here is a list of concealed handgun permit holders who have stopped mass public shootings.  This is not the first time that Vaughn has made comments on guns, though it is probably the most forceful that he has been on the topic. Here is his interview from earlier in the year for Playboy.

Do you own a gun?
I do, yeah. I believe in the right to defend yourself if need be. Hopefully you’re never in that situation, but I think you’re fairly naive to believe there will never be a cause for self-defense. But again, I believe it’s up to the individual. I don’t believe rights come in groups. You shouldn’t get more or fewer rights because of what you believe in or what nationality you were born into.