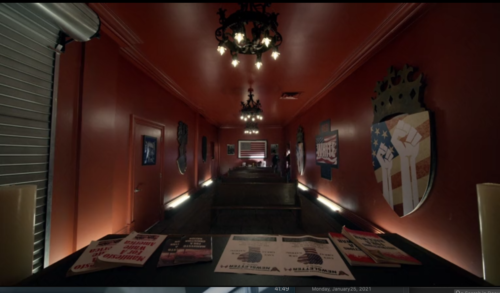 Lots of references to “hate crimes,” “Nazi symbols,” and “Swastikas and assault rifles.” They are described as “neo-Nazis crossed with the KKK.” In an attempt to demonize those who wear the American flag, the Nazis all wear American flag bandana face masks and are shown to be Christians. Even a testimonial to a black church burned over and over again by racists as late as 1998. These Nazis attack blacks and a Jewish Synagogue.

Given how the networks are working closely with gun control groups, it is hardly surprising that the theme of these television shows, that white racists are using machine guns to kill people, meshes well with the theme being pushed by Michael Bloomberg’s Everytown and other groups.

As the Crime Prevention Research Center has pointed out many times, television crime shows seem to think criminals are constantly using machine guns to shoot people. In real life, despite claims frequently made in the news media, none of the mass public shootings have involved machine guns. Of course, the show was also able to get in plugs for other liberal political positions, such as police officers bashing private schools and pushing how hard-working immigrants are harmed by these racists.

Criminals generally use machine guns so rarely that a 2016 survey of prison inmates only broke down the numbers for uses of handguns, rifles, and shotguns. The survey did not even mention fully automatic weapons. Since 1934, there was only one possible known use ever of a civilian using a machine gun in a murder. And even before 1934, they were very rare.

So far this season we have these shows with criminals using machine guns:

Other examples of television media bias on this particular point can be found here.

← On Armed American Radio: Nikki Goeser discusses being harassed by her husband's murderer from prison and what she has done about it On Chicago's WIND: Warning about antigun activists weaponizing the Capitol Hill riots and Biden's initial push on gun control →