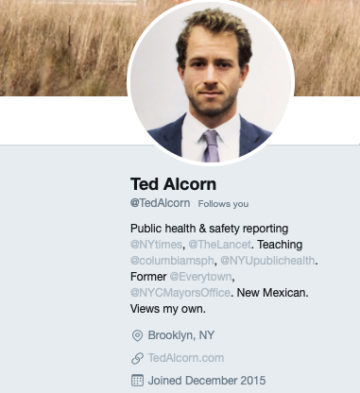 Bloomberg’s Everytown former Research Director, Ted Alcorn, is now covering public health & safety reporting, obviously including gun control issues, for the New York Times. Does the New York Times think that hiring an activist like this helps with people’s impression that they have a lot of bias on gun control issues? Does anyone think that they would hire someone who was a research director for the NRA?

Here is one interaction that Dr. Lott almost had with Alcorn on C-SPAN’s Washington Journal in April 2015 (videos available here).

Lott was originally supposed to be on for an hour on C-SPAN to discuss these issues with Ted Alcorn, the research director for Michael Bloomberg’s Everytown.  When Acorn was informed of this, he first insisted that he be allowed to appear without Lott, but the C-SPAN producer informed Alcorn that Lott had already been invited and that Lott would appear on the program.  Alcorn then apparently told the producer that he would not be able to appear because of a scheduling conflict, but the C-SPAN producer told him that was too bad but they were still going to do the segment with Lott even if that was the case.  Alcorn then realized that he could appear, but that he would not appear at the same time and insisted that he be allowed to appear after Lott. This clip is from the end of Lott’s appearance on C-SPAN.

But this is the type of person that the New York Times thinks will be a good journalist?