Original post: Every place that has banned guns (either all guns or all handguns) has seen murder rates go up. You cannot point to one place where murder rates have fallen, whether it’s Chicago or D.C. or even island nations such as England, Jamaica, or Ireland.

For an example of homicide rates before and after a ban, take the case of the handgun ban in England and Wales in January 1997 (source here see Table 1.01 and the column marked “Offences currently recorded as homicide per million population,” UPDATED numbers available here).  After the ban, clearly homicide rates bounce around over time, but there is only one year (2010) where the homicide rate is lower than it was in 1996.  The immediate effect was about a 50 percent increase in homicide rates.  Firearm homicide rate had almost doubled between 1996 and 2002 (see here p. 11).   The homicide and firearm homicide rates only began falling when there was a large increase in the number of police officers during 2003 and 2004.   Despite the huge increase in the number of police, the murder rate still remained slightly higher than the immediate pre-ban rate. 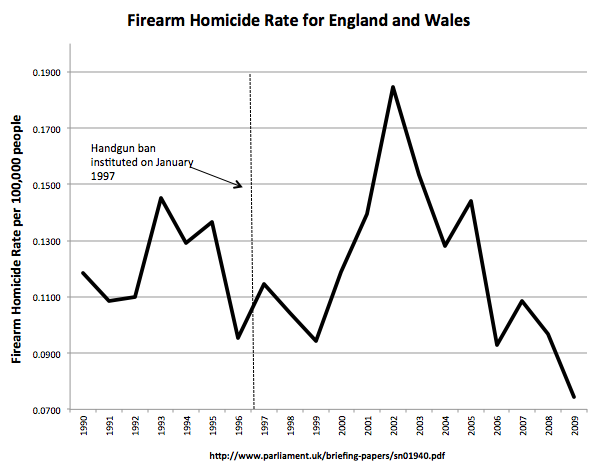 There are a lot of issues about how different countries measure homicide or murders differently, but that isn’t really relevant for the discussion here as we are talking about changes over time within a country.

Other information for Ireland and Jamaica. 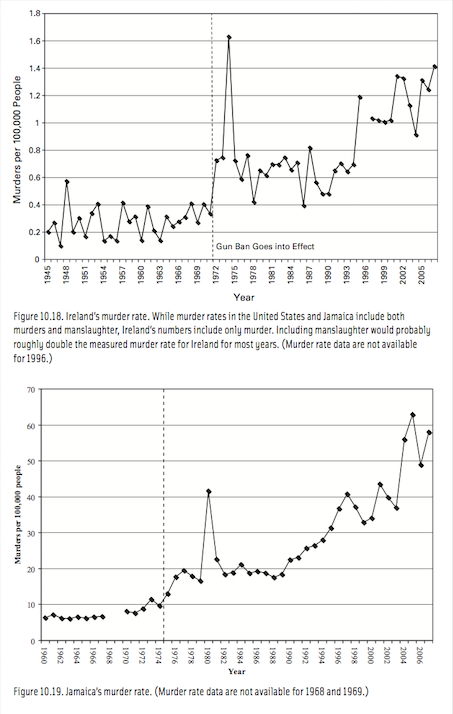 UPDATE: See also information on Venezuela available here.  It is also true for the Solomon Islands, which even appear to have only had mass public shootings after the 1999 gun ban.

How about for DC and Chicago (Figures taken from More Guns, Less Crime)? (Click on figures to enlarge.) Regressions that try to account for lots of other factors are available in that book from the University of Chicago Press.

The raw data for DC over a long period of time is available here (the crime rates are available on the bottom half of the screen).

Now Australia didn’t have a complete ban on guns, they didn’t even ban all semi-automatic guns, but a discussion on the changes in their crime rates from their gun buyback is available here (see also particularly here).

Regarding Japan, the point to make clear is that Japan has had a very low murder rate for as long as data is available, and more importantly, the guns by private citizens were long banned or extremely heavily regulated for hundreds of years.  Some point to the drop in homicides after the 1958 gun law, but they ignore the 1946 regulations under the Allied Occupation and the 1950 Order that continued “the general prohibition of possession of guns by civilians.”  The issue here is to separate out whether it is gun control or something else different about Japan that is important, and unless you can see a change before and after there has been a change in gun control laws it is difficult to infer anything about the impact of gun control laws.

Much of the debate over gun control focuses on what is called “cross-sectional” data.  That is crime rates are examined at one particular point of time across different places.  Here are two paragraphs from John Lott’s The Bias Against Guns that explain the basic problem with cross-sectional analysis.

First, the cross-sectional studies: Suppose for the sake of argument that high-crime countries are the ones that most frequently adopt the most stringent gun control laws. Suppose further, for the sake of argument, that gun control indeed lowers crime, but not by enough to reduce rates to the same low levels prevailing in the majority of countries that did not adopt the laws. Looking across countries, it would then falsely appear that stricter gun control resulted in higher crime. Economists refer to this as an “endogeniety” problem. The adoption of the policy is a reaction to other events (that is, “endogenous”), in this case crime. To resolve this, one must examine how the high-crime areas that chose to adopt the controls changed over time —not only relative to their own past levels but also relative to areas that did not institute such controls.

A cross country comparison and the problems with such a comparison is available here.