Dr. John Lott has a new piece up at Fox News responding to all the false claims about how Australia’s gun control laws are a model that the US should follow.  This is from a much longer discussion in the book, The War on Guns, and see the data at the end of this post from Lee and Suardi for part of the period.  The piece starts this way: 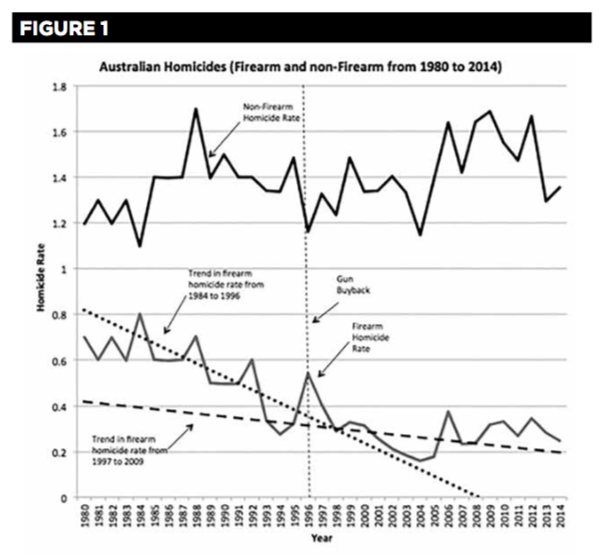 After each mass public shooting in the U.S. – such as the horrific attack at a Florida high school last week that killed 17 people – gun control advocates keep pointing to Australia as the role model America should follow to reduce gun deaths.

If only reducing crime and suicides was so easy. In reality, gun control efforts in Australia have not been as successful as we’ve been led to believe.

In fact, the only proven policy to stop gun attacks is deterrence – by allowing law-abiding citizens to defend themselves and others, as President Trump correctly pointed out Thursday on Twitter and in remarks at the White House.

The president tweeted: “If a potential ‘sicko shooter’ knows that a school has a large number of very weapons talented teachers (and others) who will be instantly shooting, the sicko will NEVER attack that school.”

This effective action proposed by the president has been greeted with disdain by most of the media.

Instead, news organizations such as USA Today, the New York Times and the Washington Post have all run stories in recent days crediting Australia’s 1996-1997 gun buyback program with cutting the firearm homicide and suicide rates in half, and eliminating mass public shootings.

Our friends in Australia have been only too eager to offer advice telling us to follow their example.

Australian Foreign Minister Julie Bishop recently offered to explain to Americans the best gun control regulations. Over this past weekend a church in Australia got international attention for putting up a sign saying: “When will they love their kids more than their guns.”

Responding, anti-gun politicians from Hillary Clinton to President Obama have pointed to Australia’s gun laws as a model that we should closely examine.

But looking at simple before-and-after averages of gun deaths in Australia regarding the gun buyback is extremely misleading. Firearm homicides and suicides were falling from the mid-1980s onwards, so you could pick out any subsequent year and the average firearm homicide and suicide rates after that year would be down compared to the average before it.

The question is whether the rate of decline changed after the gun buyback law went into effect. But the decline in firearm homicides and suicides actually slowed down after the buyback.

Australia’s buyback resulted in almost 1 million guns being handed in and destroyed, but after that private gun ownership once again steadily increased and now exceeds what it was before the buyback.

Gun control advocates should have predicted a sudden drop in firearm homicides and suicides after the buyback, and then an increase as the gun ownership rate increased again. But that clearly didn’t happen.

For other crimes, such as armed robbery, what happened is the exact opposite of what was predicted. The armed robbery rate soared right after the gun buyback, then gradually declined.

Gun control advocates like to note that there has been no mass public shooting in Australia since the buyback. But they are simply picking out a country that happens to “prove” what they want it to prove.

European countries such as Belgium, France and the Netherlands have even stricter gun control laws than Australia does, but their mass public shooting rates are at least as high as those in the United States.

During the Obama administration, the per capita casualty rate from shootings in the European Union was actually 27 percent higher than the U.S. rate.

Even excluding fights over sovereignty and including the recent attacks in Las Vegas, the Texas church shooting in November, and the Florida school massacre, the number of mass shootings in the rest of the world has been much worse than in the U.S. since at least as far back as 1970.

Many point to the widely covered work by the University of Alabama’s Adam Lankford, who claims that 31 percent of mass public shootings from 1966 to 2012 have occurred in the U.S. But Lankford’s totals don’t line up with others, and he has refused repeated requests to release a list of his cases.

New Zealand also provides a useful comparison to Australia. They are both isolated, island nations, and have similar socioeconomics and demographics. Their mass murder rates were nearly identical prior to Australia’s gun buyback.

The right approach is to look at a lot of similar places and see what gun control measures actually made a difference. To do just that, Bill Landes of the University of Chicago and I collected data on all multiple-victim public shootings in all the United States from 1977 to 1999.

We examined 13 different gun control policies, including: waiting periods, registration, background checks, bans on assault weapons, the death penalty, and harsher penalties for committing a crime with a firearm.

But only one policy reduced the number and severity of mass public shootings: allowing victims to defend themselves with permitted, concealed handguns.

Killers have good reason to avoid places where people have guns. In dozens of cases concealed-carry gun permit holders have stopped mass public shootings. In the Texas church shooting last year, the killer was killing the wounded when a man living near the church shot him.

Yet gun control advocates keep focusing on laws that won’t make any difference. None of the mass public shootings since at least 2000 would have been stopped by universal background checks.

Relying on Australia requires a misreading of the evidence, and requires that we ignore what has happened in all the other countries with strict regulations. The truth is that gun control hasn’t worked for anyone.

At Real Clear Politics: Biden Reveals His True Goal: To Ban Most Guns 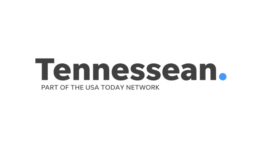