By a 98-47 vote the Texas House and a 20-11 vote in the Senate, the Texas legislature overwhelmingly passed a bill that allows concealed handgun permit holders to carry guns on college campuses. Nine states allow permitted concealed handguns on college campuses: Colorado, Idaho, Kansas, Michigan, Mississippi, Oregon, Utah, Wisconsin, and public universities in Pennsylvania outside of the Penn State system mandate concealed carry on campuses.  And Florida, Kentucky, and North Dakota public universities let permit holders keep their guns in their cars on campuses.  Texas’ new law doesn’t go into effect until the fall of 2016.  Kansas’ law doesn’t go into effect until July 1, 2017.   From the Dallas Morning News:

At the House’s urging, the measure would give public university presidents increased flexibility to establish some gun-free zones on campus. And at the Senate’s request, it would allow private schools to totally opt out of the bill’s provisions. . . .

“The bottom line is this: Senate Bill 11 makes concealed carry on Texas college campuses the law of the land, while allowing for very limited, reasonable prohibitions in unique campus locations,” the Granbury Republican said. . . .

The new legislation aims to allow those Texans to take their handguns into dorms, classrooms, cafeterias and other campus buildings. . . .

The legislation doesn’t detail specifically where schools can and can’t create exemptions. But Birdwell said his intent was for such zones to be limited to unique buildings, such as a biomedical research facility, and not to include buildings such as dorms.

“The legislative intent … is for public college campuses to be as permissive and accessible to CHL holders as possible,” he said.

A marked up copy of the final bill that came out of conference is available here.  The University president can establish gun-free zones on campus, though since the Board of Regents at a school can veto those rules and since almost all the Regents at public universities are Republicans, it is a least conceivable that some of the public universities will not enact too draconian of gun-free zones. The key part of the bill is this:

Here is an op-ed that John Lott had put together last week for the Daily Caller.  It starts this way:

William McRaven, the University of Texas System Chancellor, has weighed in heavily against allowing permitted concealed handguns on college campuses. Disappointingly, despite his fears about safety, difficulties in recruiting and retaining quality faculty, and higher tuition costs, he has offered no evidence to support his claims. With days left in the session, the fate of the bill is too close to call.

UPDATE:  According to the New York Times as of February 18, 2015 (so this is a little old), these are the laws in different states. 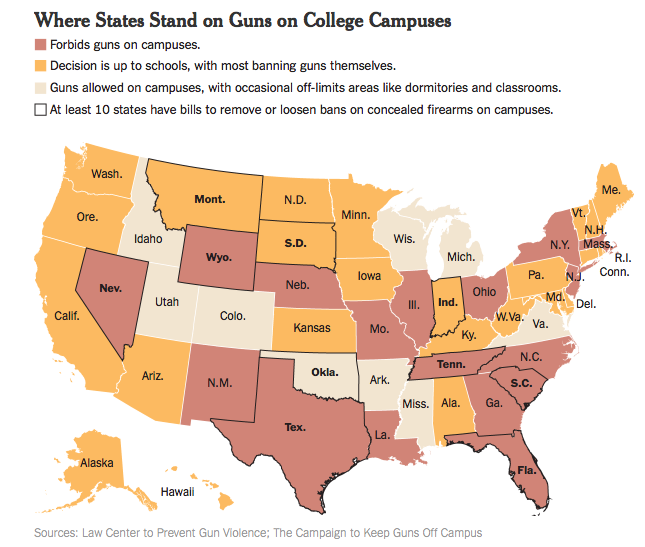