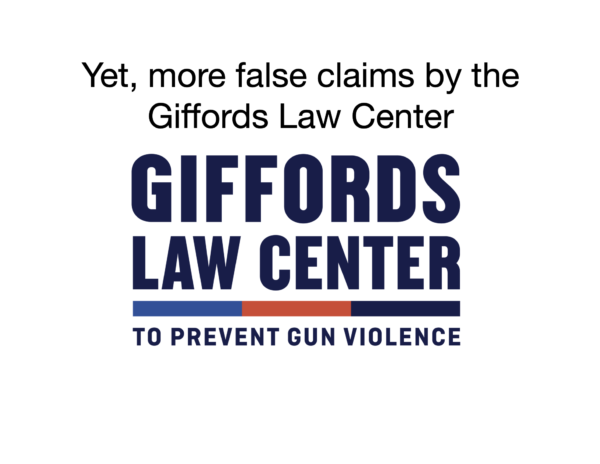 Their recent piece in the Washington Post on “Five myths about red-flag gun laws” is yet another example of that (April 23, 2021). In it, they attack a piece that Dr. John Lott had in the Fort Worth Star-Telegram last year on how so-called Baker Act Laws accomplish the same goals as Red Flag Laws but do a much better job and also protect people’s rights. These laws go by many names: Baker Act in Florida, 50-51 California, New Mexico’s is called “civil commitments,” Texas’ is called the “4800 Mental Health Commitment,” Pennsylvania’s is called the “Mental Health Procedures Act.” These Baker Act type laws allow judges a broad range of options to deal with someone who is a danger to themselves or others, and they also provide legal protections for the accused. Gun control advocates like Red Flag Laws precisely because they don’t offer those legal protections, such as providing people with legal counsel if they can’t afford it.

In any case, in the Washington Post piece, Giffords claims that these Baker Act laws only “typically apply only after a violent act has been committed,” and that is completely false. All states have these Baker Act type laws, and none of the states require a violent act before evaluating these individuals for whether they are a danger to themselves or others. So, despite the Giffords’ claim, both the Baker Act and Red Flag laws are trying to anticipate whether someone will commit harm beforehand.

We have listed the state laws below, but we have put together an Excel file with more detailed information.

← On the Michigan Talk Network: Discussing the Chauvin Trial and claims of systemic racism by Police Defensive Gun Uses By People Legally Carrying Guns: Cases From April to May 2020 →