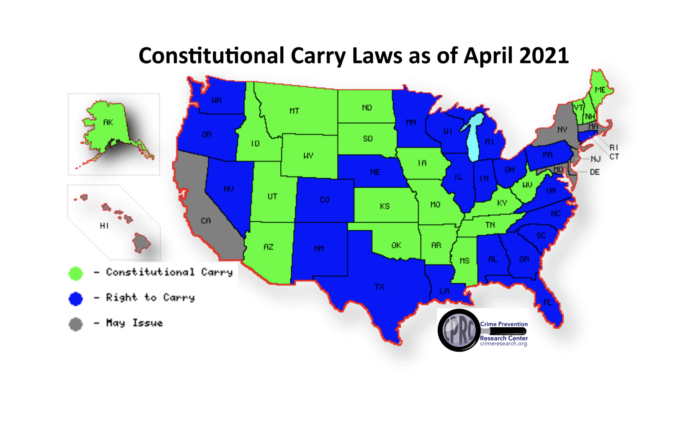 You will now be able to carry a concealed handgun from West Virginia to Idaho or from Arizona to Montana without a permit.

Iowa became the 19th state. In Iowa, the House vote was 60-37 and in the Senate it passed 31-17. In the House, all the Republicans and one Democrat voted for the bill, and in the Senate, it was a pure party line vote. Governor Kim Reynolds signed the bill on Friday, April 2, 2021. The governor said the bill “protects the Second Amendment rights of Iowa’s law-abiding citizens while still preventing the sale of firearms to criminals and other dangerous individuals.” The law going into effect on July 1, 2021.

Tennessee became the 20th Constitutional Carry state. The state Senate passed the bill by a 23-9 vote and the House by a 64-29 vote. Below is also a Tweet that he just put out on the bill.

.” Below is also a Tweet that he just put out on the bill.

This past week the Texas House Homeland Security & Public Safety passed out two different Constitutional Carry bills by 6-to-3 votes.

In Indiana, the state House bill passed by 65-31 and more than half of the Republicans in the Senate have signed up as cosponsors, but the chair of the Senate Judiciary Committee is refusing to even hold a hearing on the bill.

One of the reasons for passing Constitutional Carry was that many states stopped issuing permits last year during the Coronavirus outbreak.

Here the video of the debate on Tennessee’s Constitutional Carry Bill. Democrats were concerned about the loss of revenue to the state, but, as the CPRC has shown in the past, the number of permits in states remains flat after the move to Constitutional Carry.