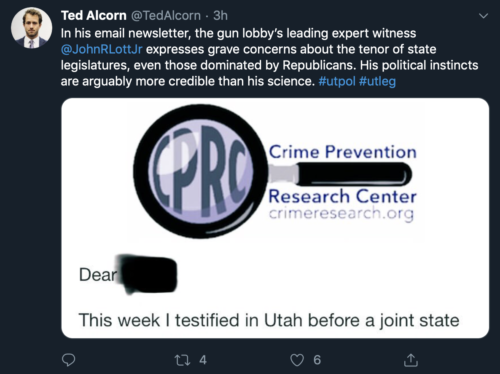 A New York Times reporter, Ted Alcorn, who used to be the research director for Mike Bloomberg’s Everytown is all excited that there is a big push for more gun control. It is interesting that he secretly subscribes to our email list.

— Refers to the “gun lobby,” put aside that his old boss spent massively more money on politics

Are either of these appropriate for a reporter or for someone who is teaching at the Columbia School of Public Health?

For those who don’t remember, Ted Alcorn always refused to debate Dr. John Lott when Alcorn was Bloomberg’s research director.

Possibly someone could also have forwarded our email to Alcorn very quickly this morning after it was sent out. Interestingly, there is no Ted Alcorn or Alcorn of any type on our email list and he blacks out the name from the email that he provides a screenshot of. All this raises the question: is it appropriate for a reporter to use a fake name? It surely isn’t necessary. We have always assumed gun control advocates subscribed to our list, but what is the point of doing so secretly? Suppose we removed him. Wouldn’t we know that he would simply use a fake name if we removed him?

← Testimony on Red Flag Laws and Universal Background Checks before the Utah Law Enforcement and Criminal Justice Interim Committee, Joint House and Senate committee On The Michigan Talk Network With Steve Gruber About Democrats Push to Have Felons Vote while they are in Prison →