Twitter offered to unlock the accounts if I agree to a post saying that “your Tweet is no longer available because it violated the Twitter Rules.” But Twitter refuses to explain why they locked our accounts when they treated liberals’ accounts differently. . . .

So we are supposed to publicly agree that our “Tweet is no longer available because it violated the Twitter Rules” when Twitter refuses to treat others similarly? But we want to get information out to people, so we are finally agreeing to their terms. . . .

Here is the piece:

For two months, Twitter has locked my personal twitter account, and I am the president of the Crime Prevention Research Center, and they locked that account almost a month ago. We haven’t been able to post anything or read messages from other users.

Twitter offered to unlock the accounts if I agree to a post saying that “your Tweet is no longer available because it violated the Twitter Rules.” But Twitter refuses to explain why they locked our accounts when they treated liberals’ accounts differently.

For my personal account in March, I tweeted that the perpetrator of the New Zealand mosque shooting was “a socialist, environmentalist, who hates capitalists & free trade.” I also wrote that the killer believed his attack would “lead to more gun control” in New Zealand and the United States.

What I tweeted was entirely accurate, and the New York Daily News also fact-checked my op-ed piece.

In both cases, Twitter identified the offending tweets, and then wrote, “We determined this Tweet violated the Twitter Rules, specifically for:” but the messages ended there. Appeals produced no additional information. When one logs into either account, the only thing you see is the offending Tweet. Twitter hasn’t bothered to provide either the Crime Prevention Research Center or me with an official explanation for why the accounts were locked, but they have made clear that it was this tweet that supposedly violated their terms.

Fortunately, I was able to use a connection to ask what was happening, but other victims of Twitter’s censorship may not even get an explanation. Because of that connection, a Twitter representative emailed me: “Due to the safety of Twitter users and regulations abroad, Twitter does not allow linking to content that includes excerpts of manifestos of mass shooters.” It applied to both my original tweet that linked to a page at the Crime Prevention Research Center that had a few quotes from the killer as well as to the Crime Prevention Research Center that linked to the New York Daily News article.

The explanation seems simple enough, but there is a problem. Lots of other accounts have tweeted a link to that same News piece, including the New York Daily News itself to its over 700,000 followers. More than 80 other accounts retweeted the link, some with many more followers than the CPRC. But none of these other accounts have been locked or had posts removed for linking to the article.

The Twitter representative’s only possible explanation was that someone “reported” the CPRC tweet, but that no one reported the other accounts’ tweets. “Specifically, the new Australian law prompted Twitter to take a very aggressive approach on materials related to Christchurch. Companies can be fined up to 10% of their annual revenue.” The Twitter representative told me that once someone reports a tweet that violated those countries’ rules, they were powerless to ignore the complaint because the Australian and New Zealand governments would have been alerted to the violation.

So, with both of my Twitter accounts locked, I did something that I had never considered doing before. I asked people to report those tweets that had linked to my News piece. But nothing happened.

Why weren’t the other accounts treated similarly? Twitter has refused to explain and stated that their decision is final.

Unfortunately, the problem is much broader than my Daily News piece. A quick search reveals what seems like many hundreds of newspaper articles, as the Twitter representative wrote me about our account, extensively “linking to content that includes excerpts of manifestos of mass shooters” and many thousands of tweets linking to those articles.

A Kansas City Star article quotes the New Zealand killer’s manifesto at length on 12 occasions. But the article focuses on the killer’s racism and claims, “Modern white supremacy is an international threat that knows no borders.” By contrast, my piece mentioned that the killer “frequently disparages minorities, but his racism stems from environmentalist concerns.”

The Star calls the killer a “right-winger” several times, I argued that he was in no way “right-wing.” Perhaps the censors at Twitter don’t like to admit that a socialist/environmentalist who hates capitalism can also be a racist.

The Council on American-Islamic Relations (CAIR) was among the many whose tweets linked to a Star article claiming that it proved “New Zealand shooting suspect says in manifesto he was inspired by violent U.S. extremism.”

Nor is it just the American media that extensively quotes from the killer’s manifesto. Canada’s National Post used 13 quotes and concentrated on the killer’s racism without citing the manifesto’s explanations concerning overpopulation and high minority birth rates.

But if the problem is a general “linking to content that includes excerpts of manifestos of mass shooters,” what is Twitter to make of the New York Times’ recent Sunday articlethat extensively, if selectively, quoted from the El Paso killer’s manifesto? The article tried to link the killer’s discussion about immigration to similar words about illegal immigration used by conservative media stars. Regarding the article, its lead author, political reporter Jeremy Peters, tweeted: “The overlap between the El Paso killer’s rhetoric and what’s considered mainstream conservative rhetoric will make you stop cold.”

The CPRC’s tweet was about how the El Paso killer said: “In general, I support the Christchurch shooter and his manifesto.” But why is Peter’s tweet and article deemed acceptable and the CPRC’s not?

So we are supposed to publicly agree that our “Tweet is no longer available because it violated the Twitter Rules” when Twitter refuses to treat others similarly? But we want to get information out to people, so we are finally agreeing to their terms.

It’s scary that a government halfway around the world can censor completely accurate American political debates, effectively interfering in our democratic process. It is still scarier when this censorship is selectively applied only to tweets by conservatives, and Twitter feels no need to explain their biases.

The entire piece along with comments on it is available here. 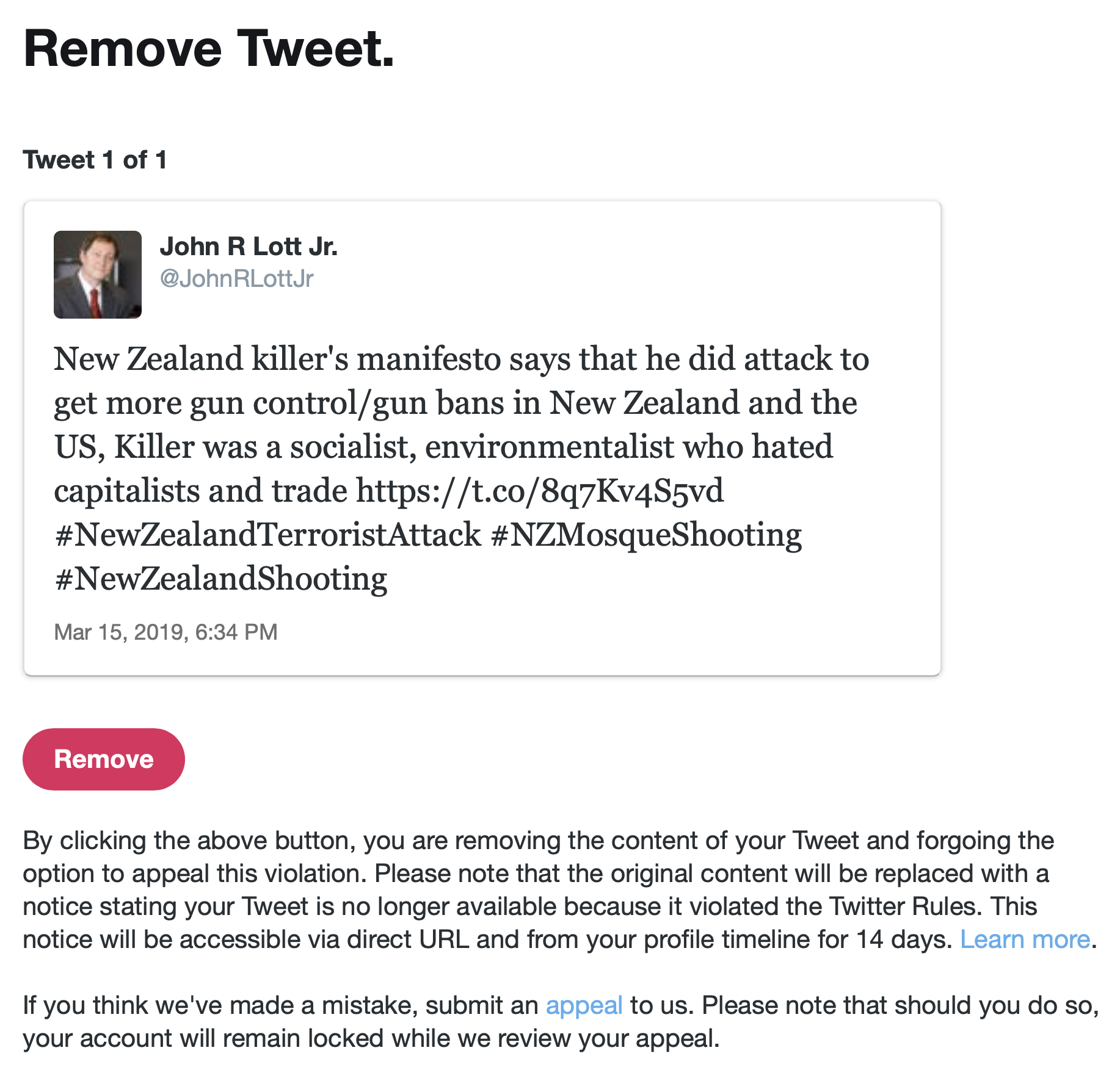 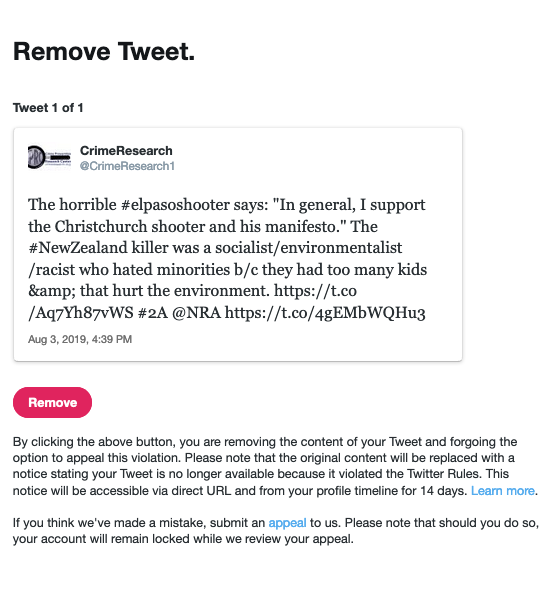