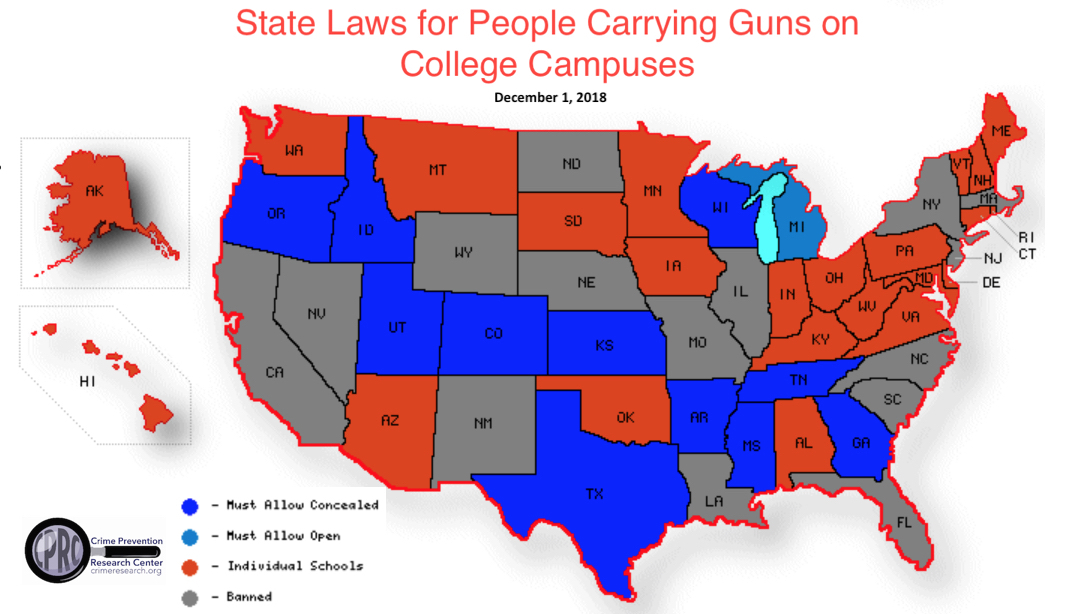 On Thursday, May 4th, 2017, Georgia became the 12th state to mandate that public universities allow people to carry guns on campus.  Following Arkansas, Georgia was the second state to pass campus carry in 2017.  Ten other states have done so: Arkansas, Colorado, Idaho, Kansas, Mississippi, Oregon, Tennessee (faculty and staff), Texas, Utah and Wisconsin.  Unlike Arkansas, Georgia doesn’t impose additional requirements for carry on campus as opposed to carry in other places: “Georgia requires people to be at least 21 — or at least 18 with proof of basic training or active service in the military — to receive a concealed carry permit. Applicants must provide fingerprints, which are used by state agencies to check for criminal records, and clear an additional federal background check.”

Michigan is in a state of flux right now. The Michigan State Police interpret the law to mean that people can carry openly with a permit, but some universities in the state say that the decision should be up to the individual schools. The case is now before the state Supreme Court, and the debate is over whether Michigan mandates that people be allowed to carry openly on campus or whether the decision is up to the individual schools.

More details on the campus carry debate can be found here.

Our list is very similar to that put out by the National Conference of State Legislatures (updated August 14, 2018), though they list Michigan as a state where people are banned from carrying guns. But as the Detroit Free Press notes:

The National Conference of State Legislatures also doesn’t include Tennessee in its overall count of concealed carry states because it is focusing only on student concealed carry, whereas Tennessee only allows faculty and staff to carry. By contrast, our focus is on whether colleges are gun-free zones. There is one other qualification on this classification: while the restriction is limited to faculty and staff, it also includes graduate students who teach classes if they are not enrolled in a class. However, it is common for graduate students to not take classes after their second year.