Could you imagine either of the Bushes or Clinton or Obama ever saying something like this? Obviously, they could have done so, but they never made statements like this. Indeed, Clinton and Obama would call for more gun-free zones.

“Finally, we have a president who understands what most economists and criminologists who have done peer-reviewed empirical research understand. These gun-free zones serve as magnets for these attacks. Killers go to where victims are defenseless. When are we ever going to learn that virtually all these mass public shootings occur in places where people aren’t allowed to protect themselves. We should have signs up in front of all these synagogues that say the there are people who have concealed handguns there to protect others. This is so much more important than an armed guard who can be readily identified by a terrorist.  The synagogue also said that they were limited in what they could do security wise because of finances. Allowing people to have permitted concealed handguns is very inexpensive.”

From the New York Times

Representative Nancy Pelosi of California, the House Democratic leader, offering prayers for the victims and calling for an overhaul of gun legislation.

“But thoughts and prayers are not enough,” she said. “Congress must finally act on common sense, bipartisan gun violence prevention legislation.”

Shira Goodman, who is the executive director of CeaseFirePA, called for these regulations in an op-ed in the Philadelphia Inquirer. 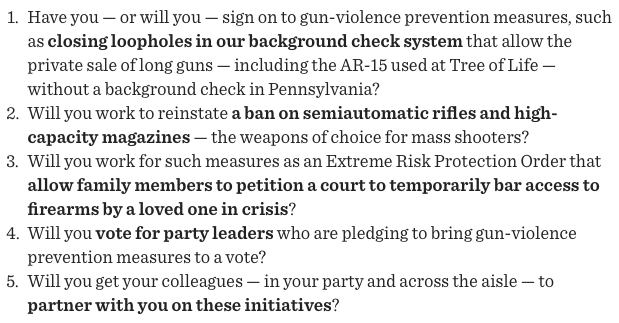