Yet another example of how Media Matters distorts what people say 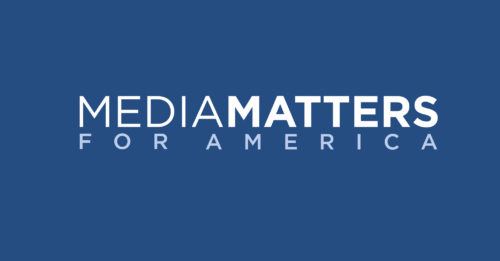 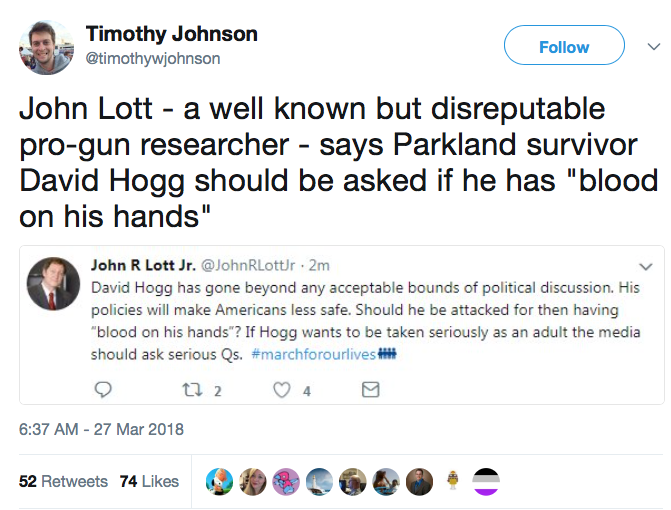 Mr. Johnson’s Tweet is available here.  Media Matters has a long history of distorting what people have written or said (also here).  After pointing out that Hogg’s attacks on others “has gone beyond any acceptable bounds of political discussion,” the point of Dr. Lott’s question was whether he should be treated to the same types of attacks that he levels at others.  Presumably, most would realize that such attacks were “beyond any acceptable bounds.”  Yet, people such as David Hogg and Timothy Johnson — as well as Media Matters — seem determined to make such attacks acceptable.

Those interested can vote on whether Media Matters/Timothy Johnson claim is accurate by going here.

Hogg even attacks extremely ill Senator John McCain on the gun issue.  If someone thinks that McCain is in the pocket of the NRA, they have not been paying attention to the debate on guns over the last 20 years. 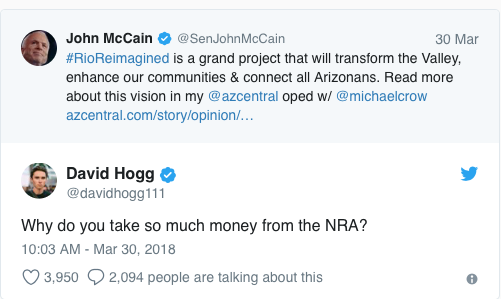 According to the Arizona Republic: “McCain, 81, is now battling a deadly form of brain cancer called glioblastoma. McCain’s health has kept him in Arizona since before Christmas and it is unclear when he will return to Capitol Hill.”

Of course, Hogg has a lot of attacks on people.

says NRA is “allowing the slaughter” of kids

regarding Senator Marco Rubio, he says: “I’m going to start off by putting this price tag right here as a reminder for you guys to know how much Marco Rubio took for every student’s life in Florida.”

← Media Bias on guns: Chicago Fire: Does ammunition in a fire pose a real threat to firemen? On Dana Loesch's Relentless to discuss the relationship between illegal drugs and gun crime →