Kristin Tate has this article at Breitbart.com:

The nonprofit generally targets Republicans and is regularly cited by pundits and news outlets. More recently, the group engaged in what could best be called a smear campaign against John Lott, an economist, firearms researcher, and Founder of the Crime Prevention Research Center. For more than a decade, Lott has developed a unique public profile as an expert on guns and society, who combines advocacy with substantial data and academic rigor.

Media Matters has devoted 87 postings on Lott during a seven year span, with the objective of discrediting him personally and countering the guns rights movement. Making this situation interesting is that Media Matters, in its campaign against Lott, has apparently crossed the boundary from reporting misinformation to systematically generating it.

In seven years of writing about Lott and referring to his work, the organization prevented Lott from speaking out on his own behalf on the site, despite his consistent endeavors to do so. When Lott tried to leave comments on Media Matters articles, a site administrator deleted them. Other comments never got posted at all.

In one instance the site even deleted comments from Lott, in which he explained to Media Matters readers why his eyebrows are disfigured due to surgery he had when he was young. 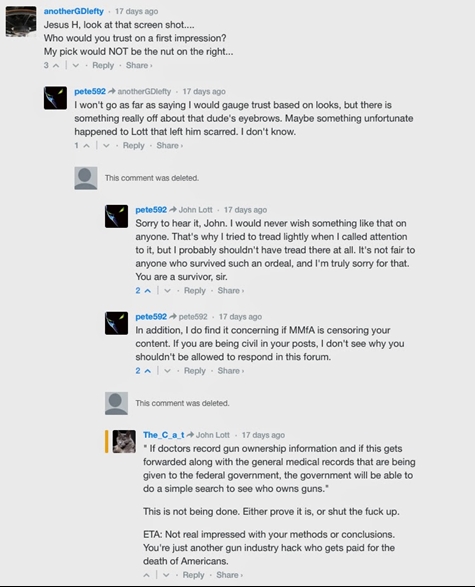 Media Matters did not correct the commenting issue after Lott made repeated attempts to personally reach out to the group’s staff members. . . .

The rest of the article is continued here.