Is Politifact really the organization that should be fact checking Facebook on gun related facts?

If gun control advocates were more confident with their arguments, presumably they wouldn’t have to so grossly exaggerate their numbers.  On December 27th, 2016 Politifact evaluated this claim that there are 7 children a day who die from guns, and Politifact’s Chris Nichols concluded that this claim by Congresswoman Jackie Speier that “more than seven children PER DAY have died from gun violence” was “mostly true.”

Politifact relies on a quote from the Brady Campaign’s website: “Every day, 7 children and teens die from gun violence.” The website notes that it crunched CDC data for children and young people through age 19.

Even the Brady Campaign differentiates children from teenagers.  If you just look at those who aren’t teenagers, the number of firearm deaths declines to 692, which comes to 0.63 deaths per day. 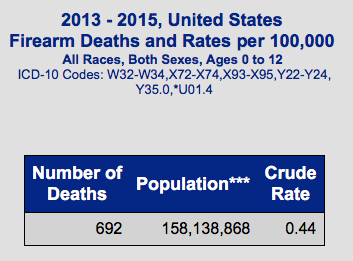 Homicides are not Murders

Most people, apparently including the Brady Campaign, just assume that homicides and murders are the same, but the difference between them is that homicides include justifiable homicides.  Do you really want to lump in murders with cases where someone uses a gun to stop a murder or other crime from occurring?  For murders for those under 18 for 2013 to 2015, the total for those three years is 573 fewer deaths than homicides (1,551 firearm murders (2013 479, 2014 519, and 2015 553) versus 2,124 firearm homicides).

The CDC numbers that Politifact relies on is making comparisons include mistakes that the CDC still has not corrected.

Mixing in gang murders and other deaths.

The vast majority of these deaths for 15 to 19 year olds involve murders involving gangs, primarily drug gangs.   Linking children and guns is done to connote guns in the home for law-abiding households, but the causes and cures for drug gang violence are dramatically different children getting a hold of gun in law-abiding homes.  The notion that you are going to be able to pass laws to stop drug gangs from getting guns is about as easy as stopping those drug gangs from getting drugs to sell.  For a related discussion see here.  This is an additional reason to not include 15 to 19 year olds.

The laws that Congresswoman Speier and the Brady Campaign are pushing lead to more deaths.  Regulations, such as “Safe Storage Laws,” disarm law-abiding citizens, thus encouraging criminals to attack and making them more likely to succeed in committing their crimes.

Do we really want Politifact serving as the fact checker for Facebook?

As the CPRC has previously written, fact checkers, such Politifact, have their own biases — usually the same liberal biases that we see in the rest of the mainstream media.  This latest example from Politifact just provides additional evidence for those concerns.

← UPDATED: Twelve Additional Defensive gun uses by Concealed Handgun Permit Holders During December that we didn't previously report CPRC in the News: Politifact, The Village Voice, Breitbart, and local newspapers across the country →