ABC News’ extremely misleading report on dangers of guns in homes: Instead of asking neighbors if they own guns, ask them if a gang member lives there 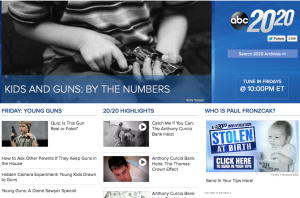 Diane Sawyer: “Every hour a child is rushed to the emergency room because of gun shots.”

David Muir: “Looking at children and guns, the most recent statistics from 2009. And take a look tonight, they are eyeopening. The new numbers are arresting. . . . . 7,391 children rushed to the hospital every year because of those gun injuries, so often accidents in the home. 453 of those children die at the hospital. . . .”

ABC News is planning multiple hours of coverage on Friday that is only designed to incorrectly scare people into not owning guns because of constant references to “children” and “accidents in the home.” While the Pediatrics Journal study that they are emphasizing here has its own problems, ABC News doesn’t even come close to accurately reporting what the study does show. The ABC News report constantly talks about the significant risk of guns to children generally, recommending that people ask their neighbors about gun ownership. Their report makes it look like these accidents involve young children, but the numbers are driven by 17, 18, and 19 year olds, overwhelmingly blacks in gangs.

First take two figures from the paper at Pediatrics. The figure clearly shows that the hospitalization rate from firearm injuries due to all causes is about 13 times higher for black males than white males who are 15 to 19 years old (Click on figure to make it larger). 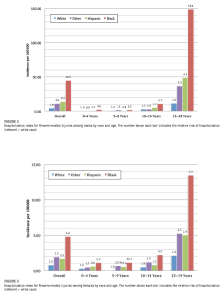 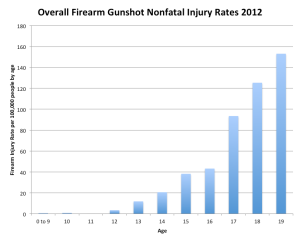 The numbers from the CDC for firearm injuries in 2009 would be 12,057. That is greater than the 7,391 hospitalizations from such injuries reported in the paper at Pediatrics. But there is another important consideration. Firearm injuries involving gangs are more serious than for others, simply because gang members with injuries only go to hospitals when those injuries are very serious. What this implies is that true share of hospitalizations for 17, 18, and 19 year olds out of those under 20 is even greater than 76 percent.

Now consider the conversations that ABC News is recommending that you have with your neighbors (click on screenshot to make it larger). 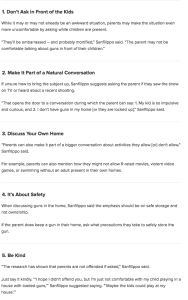 Rather than asking neighbors if they have a gun, what would make sense is asking them if they have a 17, 18, or 19 year old gang member in the house.

At The Hill Newspaper: Locking guns won’t do anything to save lives

Is Politifact really the organization that should be fact checking Facebook on gun related facts?