From the left and right, people are bombarded with diametrically opposing claims on guns.  But most of this bombardment isn’t coming from the National Rifle Association.

Michael Bloomberg is spending far more money — hundreds of millions of dollars — trying to convince Americans that guns should be kept out of the hands of even law-abiding citizens.

And yet, by double-digit margins, Americans say that they feel safer if more people in their neighborhood own guns.  The answer is the same on concealed carry. 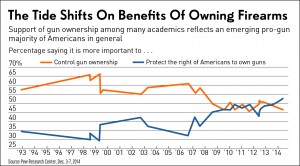 Most of the media are doing their best to convince Americans that gun ownership is dangerous. Some, such as the New York Times, seem to interview only academics who believe in gun control.  But what do the so-called experts really believe?

To find out, Professor Gary Mauser of Canada’s Simon Fraser University and I teamed up to survey researchers who had published gun-related, peer-reviewed empirical research. We limited our search to those who had published in criminology and economics journals over the last 15 years.

These criminologists and economists agree with the American people by an overwhelming margin.

Economists and criminologists tend to approach their research in very different ways.  Economists believe in deterrence: As something becomes more costly, people do less of it.  Deterrence does not figure prominently in the thinking of most criminologists. Criminologists usually don’t study the importance of police in deterring crime.

Economists and criminologists differ in other ways.  Taking the average of surveys on academic economists’ political views, we find that Democrats outnumber Republicans by almost 3 to 1.

In sociology, of which criminology is a subfield, there are about 37 Democrat faculty members for every Republican.  Many sociology departments may not have even a single Republican.

Although they both lean Democrat, economists and criminologists both find strong evidence that guns are used more for self-defense than for committing crimes.

They also find that gun-free zones attract criminals, that guns in the home do not increase the risk of suicide, that concealed handgun permit holders are much more law-abiding than the typical American and that concealed carry leads to lower murder rates.

On every question but the one on whether a gun in the home increases the risk of suicide, those surveyed took the pro-gun position by a margin of approximately 30 percentage points.  Even on the issue of suicide, the academics believed by a 20-point margin that increased gun ownership would not lead to more suicides.

The margin on whether permitted concealed handguns reduce murder rates?  A staggering 40 points.

On only one question do the two groups have different majority opinions.  This is whether guns are used more frequently in self-defense than they are used in the commission of crime.

In this case, criminologists thought by a 51% to 44% margin that guns were more frequently used in the commission of a crime.  Economists thought the opposite by a margin of 83% to 17%.

In the criminologists survey, a number of the respondents answered, “I don’t know,” but were then asked which side they would pick if forced to choose. The majority opinion among criminologists exists only when people were forced to pick sides.

Academics have perhaps been leading the way in a tidal shift on thinking about guns.  Over the last 15 years, Americans have become much more supportive of gun ownership. In a Gallup survey, people answered “Yes” by a margin of 63% to 30% to saying that they believe gun ownership makes their homes safer.

Another Gallup survey found that 60% of gun owners listed “personal safety/protection” as the reason why they owned a gun. And a December 2014 Pew Research Center survey found that 57% of Americans believe that gun ownership “protects people from becoming victims of crime.” Thirty-seven percent believe it “puts people’s safety at risk.”

Who’d have thought it?  At least on the subject of gun ownership, many liberal academics have apparently actually let their views be shaped by the evidence.