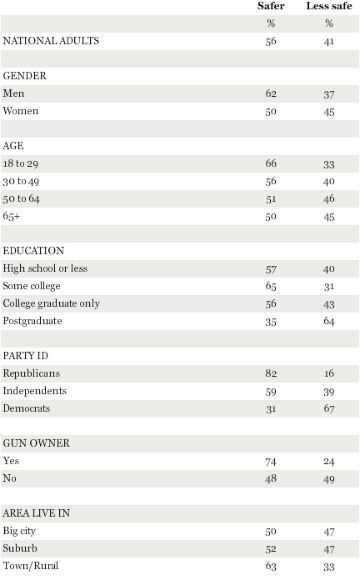 For almost all categories of Americans, there is significant support for the notion that allowing people to carry permitted concealed handguns makes Americans safer.  Only Democrats and those with a post-graduate education do not believe this, but that doesn’t mean that these individuals believe that carrying represents a risk.  If the question were asked whether allowing people to carry concealed handguns either made us safer or had no effect, it is possible that the results would be even more overwhelming (after all while the vast majority of research finds that concealed handgun laws improve safety, no peer-reviewed research by criminologists or economists find that it increases murder, rape or robbery rates).  Non-gun owners and Independents are equally divided.

Part of this may simply be that gun control advocates have constantly predicted disaster, and their claims haven’t come true.  This is despite the best efforts of places such as the Violence Policy Center, Americans realize how incredibly law-abiding permit holders are (here, here, here, and here).

UPDATE: There is also a related CNN poll, but the big difference is that this question doesn’t ask if people have a permit or even whether they are law-abiding citizens.