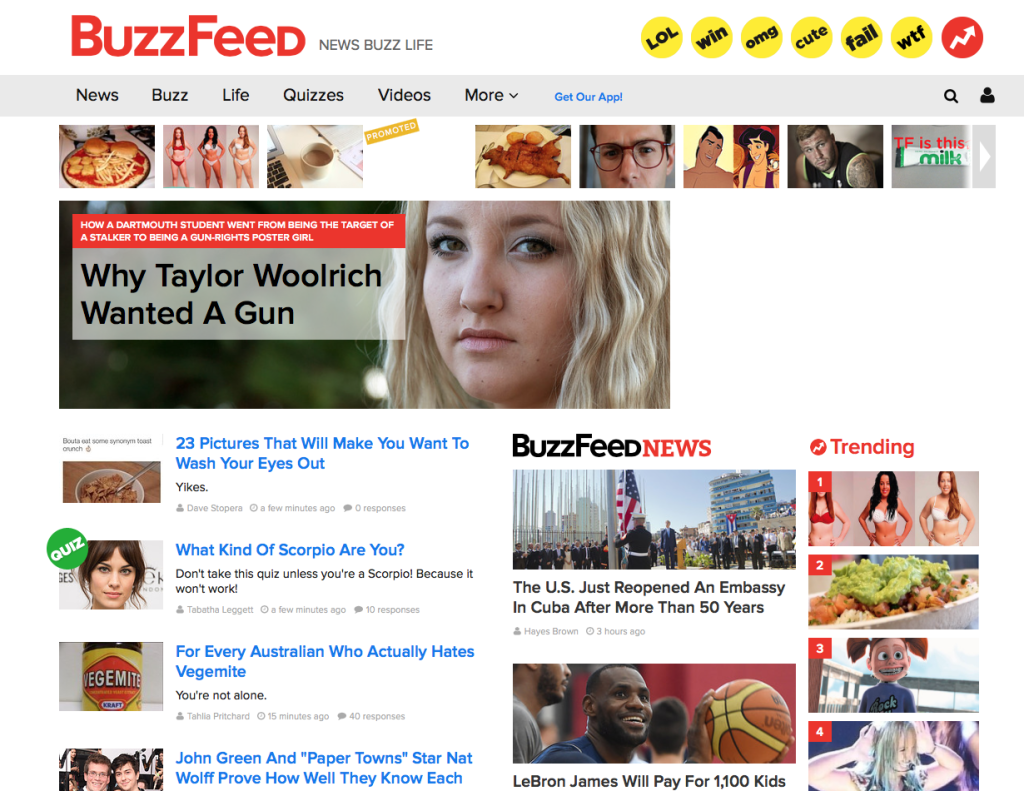 Last August, Taylor Woolrich was the first speaker at our conference for Students for Concealed Carry. Her tragic story about a woman who was being stalked and her desire to be able to defend herself received a lot of media coverage. In a piece at Buzzfeed last night and today, there is a story up about how John Lott supposedly put pressure on Taylor Woolrich to have an op-ed at Fox News.

Lott and Rebekah Riley, who was CPRC’s director of communications at the time but no longer works there, had encouraged Woolrich to tell her story to journalists — but, they say, warned her of the implications of telling it. On the day of the conference, Woolrich also booked an interview on her own with a reporter from the BBC. Later, when she told Lott about the BBC, he became “extremely, inappropriately pushy,” she says, “controlling and kind of snappy.” Woolrich chalked it up to Lott disagreeing with the BBC’s political leaning. (Lott denies this and says he would have been “extremely happy” for Woolrich to get such a “big hit” as the BBC.) Taylor decided that when she returned to California, she would cut off contact with him.

Then Fox News decided to publish the op-ed after all, but only, according to Lott, if it came directly from Woolrich. They needed it immediately. When she said she didn’t have time to write a new piece from her first-person perspective, Lott offered to do it instead and Woolrich agreed. “I don’t know if I should just say yes and not piss him off,” she remembers worrying.

The piece incorporated elements of her talk at the conference, but otherwise it was the essentially the same article written by Lott, which is still online at the Daily Caller. “It’s his op-ed,” she says. “Word for word, except the chunks that match what’s said in my speech.” The references to Lott’s disputed research? Not hers. The link to the Amazon sales page for his book? Not hers. The headline? “Dear Dartmouth, I am one of your students, I am being stalked, please let me carry a gun to protect myself.”

But Buzzfeed’s writer, Madison Pauly, and editor Anita Badejo, simply ignored text exchanges Lott sent them that he had with Taylor — and those exchanges tell a different story from what their piece presents. The texts show that Taylor appeared enthusiastic to have Lott’s help in getting her story out, and that she approved the story to run on Fox News. Just a few of Buzzfeed’s omissions and errors:

Buzzfeed didn’t mention Taylor’s text to Lott on August 6th, in which she wrote “I am totally okay with you submitting it [the Fox News article].”

Buzzfeed ignored that Taylor wrote Lott texts such as “I would love to get my story out there and be able to turn this whole mess into some sort of positive” and “I am happy that NYC [media appearance] is working out!”

Buzzfeed ignored emails in which Taylor wrote Lott things like, “thanks again for all your work on this” — in reference to the additions he had made to her draft op-ed.

Even worse, Buzzfeed’s Pauly and Badejo committed journalistic malpractice by failing to inform readers that what Taylor told them changed over time. When reporter Madison Pauley first emailed Lott, she wrote him indignantly, “Richard Bennett victimized Taylor by taking control away from her [Taylor]. If, as Taylor says, she neither wrote nor approved the final version of the op-ed that bears her byline, more control was taken from her —control over the way she tells her story. This would mean that a victim’s story was spun, without her consent, for political/personal gain and falsely attributed to her.”

After Lott sent Pauly the text Taylor had sent him (“I am totally okay with you submitting it”), Pauly wrote, “I’ll get back to you after I think about this for a few days.”

Lott then didn’t hear anything for months, until this week, when Buzzfeed editor Anita Badejo reached out. After Lott told her about the text in which Taylor said “I am totally okay with you submitting it,” Badejo responded to Lott that Taylor “completely refutes that she sent the text in which she gave you permission to submit the article, and questions its authenticity.”

After Lott offered to show the text to Badejo in person, or have a tech expert of their choosing come to Lott’s office and verify that it is real, Badejo then insisted that it was not relevant.  Yet, in the version of the article that finally appeared, Taylor’s story changed dramatically: she now claimed that she had given permission for the op-ed, but that she had done it because she did “not [want to] piss [Lott] off.”  [The text messages below show no tension involved in Taylor and Lott discussing her doing the BBC interview.]

Not relevant? Couldn’t Buzzfeed leave that to their readers to decide?
Lott worked with Taylor in good faith to help get her story out. It is a shame, but no surprise, that Buzzfeed sees the need to paint an organization that did its best to help her get her speak out as the villain. It’s worth considering: If, a year from now, Taylor were to change her mind again and be dissatisfied with the way Buzzfeed handled things; would it be fair to say that Buzzfeed used her as a tool to try to discredit people they don’t like? No, it would not — yet that is what Buzzfeed is doing to Lott here.
Buzzfeed certainly has an axe to grind. In their article, they underplay Lott’s previous interactions with Jonah Perretti, the founder and CEO of Buzzfeed. Perretti had impersonated Lott during 2003, setting up a website “AskJohnLott” and sending out a lot of emails under Lott’s name that pretended Lott had changed his mind on gun issues. After being sued for the impersonation, Perretti issued an apology, took down the website, and also took down a similar site where he was impersonating another person, Jeff Goldblatt.
There are many other errors in the piece, but we hope this incident will at least give the public a better idea of how Buzzfeed and its founder like to operate.
Here are some of the texts between Woolrich and Lott. 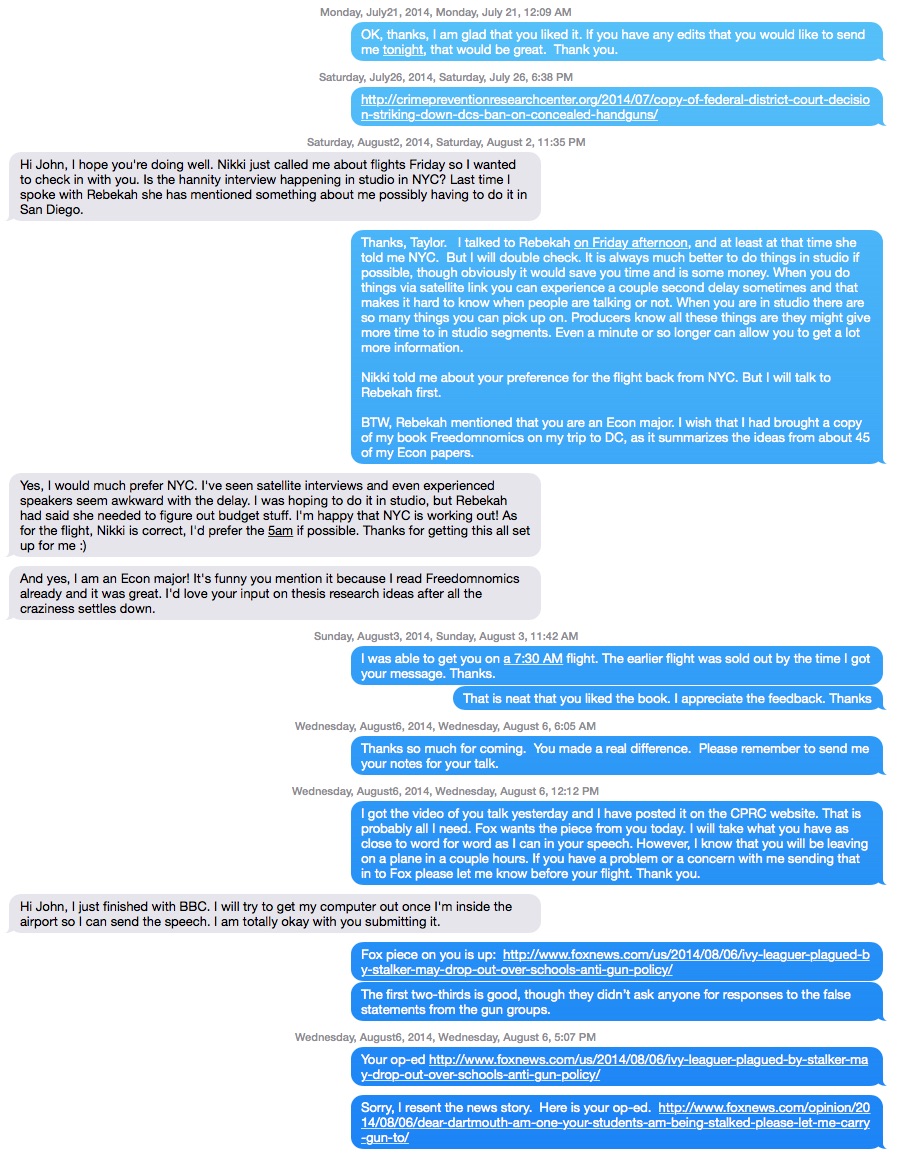