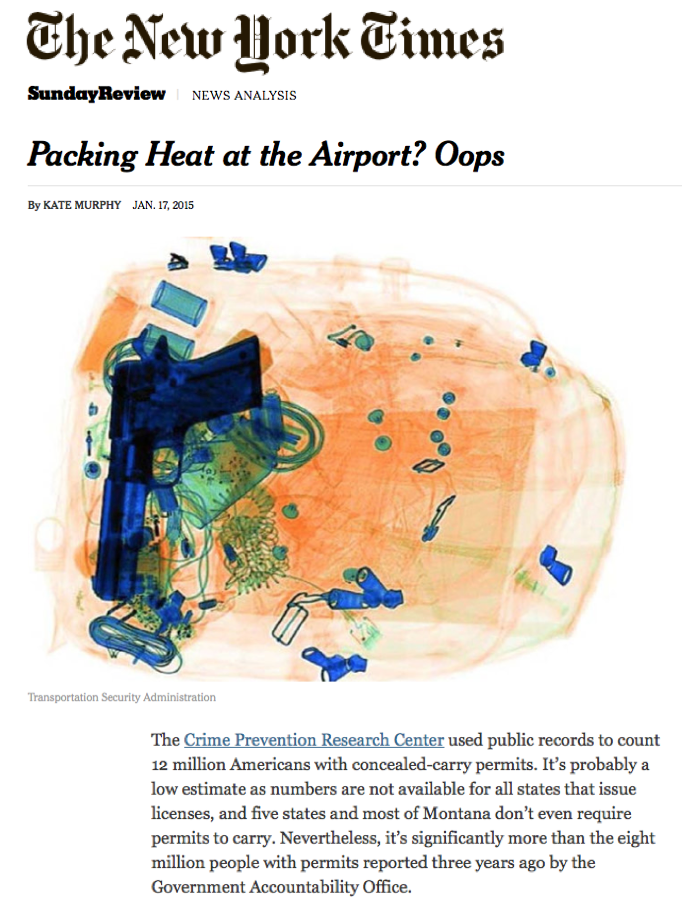 The Sunday New York Times piece by Kate Murphy has this:

. . . The Crime Prevention Research Center used public records to count 12 million Americans with concealed-carry permits. It’s probably a low estimate as numbers are not available for all states that issue licenses, and five states and most of Montana don’t even require permits to carry. Nevertheless, it’s significantly more than the eight million people with permits reported three years ago by the Government Accountability Office. . . .

Gun confiscations at checkpoints have been on the rise, reaching approximately 2,200 last year, the agency reported, a 20 percent increase over the previous year and 230 percent more than in 2005. . . .

The permit data for 2005 isn’t perfect, but my best guess is that there were about 3.8 million permits.  In that case, while the number of confiscations rose by 226%, the number of permits rose by 216%.

By the way, the most recent numbers from the TSA imply an annual rate of firearms confiscated at airports of 1,664 (in a report released on January 16th, 2015, there were 32 per week times 52 weeks).  Click on picture to enlarge.

Ms. Murphy’s piece does make the claim that the number of active shooters is increasing.  Unfortunately, the report she relies on is filled with errors.  She also discusses the recent tragedy where a toddler shot his mother, but she doesn’t any of the defensive gun uses.  The media tends to exaggerate the rate bad things that happen without acknowledging the lives saved.