CPRC at Fox News: “The bias against guns: What the media isn’t telling you”

CPRC’s John Lott has a new piece at Fox News that starts this way:

Just two days before New Year’s, a 2-year-old accidentally shot and killed his mother at a Wal-Mart in rural Idaho. The victim was Veronica Rutledge, a 29-year-old concealed handgun permit holder. The child had reached into his mother’s purse. Massive news coverage ensued. Tragedies like these make headlines. That’s understandable. But where was the news media on the previous day, when concealed handgun permit holders likely saved multiple lives?

— In Fargo, N.D., four people robbed a 36-year-old man and beat him unconscious. Fortunately, a permit holder stopped the attack. “The passer-by, who has a license to carry a concealed weapon, brandished his gun to end the robbery,” police reported.

— In Kissimmee, Fla., a church employee shot at a pastor after being fired from his job. The pastor had a permit and returned fire, wounding the attacker. Weren’t these stories equally newsworthy? To save a stranger, a permit holder stood up to four attackers. Without the pastor’s concealed handgun permit, there could have been a mass shooting in a crowded church. That would surely have gotten massive national news coverage, but the pastor stopping the attack wasn’t considered a story. . . .

The rest of the piece is available here. We have gotten a lot of emails commenting on the last part of this op-ed regarding whether Veronica Rutledge carried the gun properly. Here are a couple very typical comments that I received. In this case, a retired police officer who taught concealed carry classes wrote me:

“The victim in this case was carrying her gun off-body, in a purse. I tell my students that off-body carry is to be AVOIDED. Control of the gun is badly compromised by this method of carry. Your purse/man-bag/brief case/ can be easily snatched from you.”

I agree that it is better for people to carry guns on their person, but for many women that isn’t practical. Women wear tight fitting clothes and often don’t have a good place to store a gun concealed on their person. If they do try to carry it concealed, the bulge from the gun will reveal that they are carrying. Having a purse with a special compartment is at least a second best option. Given the large benefit that women have from carrying, I would argue that it is better that they carry this way than not carry at all.

I teach my students that they should carry their guns with a round in the chamber and the external safety (if there is one) engaged. It does not make sense to put yourself at the disadvantage of having to load your gun before you can fight.

If the gun is on the person and under their control, having a round in the chamber makes sense for the reason mentioned. But when a gun is not in your possession, there are other considerations. Since you don’t have the gun under your control, if you have an external safety, it should be engaged. If you don’t have an external safety, you should have some method of making it difficult for people to easily discharge the weapon and one obvious option is not to have a round chambered. Veronica Rutledge apparently had a Smith & Wesson Model M&P Shield 9mm semiautomatic pistol, though it isn’t clear whether it had an external manual safety. If it did have a safety, it seems hard to believe that she had it engaged. If it had been engaged, it is doubtful that a two-year-old would have known to disengaged it. If the gun didn’t have an external safety, she would have been wise to not have a round chambered in the gun while the gun was not under her direct control. If you want to have a round chambered in the gun and the gun isn’t going to be under your control, at least get one with a safety. The point is that there are trade-offs in life. Rules that make a great deal of sense when the gun is under your control may not make sense when the gun isn’t under your control. The numerous emails that we have gotten don’t seem to acknowledge these trade-offs. In any case, the point of the piece at Fox News was to point out how this case with Veronica Rutledge is unique. UPDATE: Three days after the piece was first posted it was still the number one op-ed in the opinion section at Fox News. 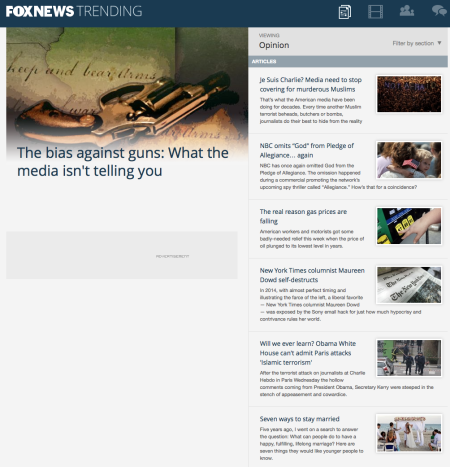