Counties around Portland, Oregon experience explosive 41% or more growth in concealed handgun permits from 2011 to 2014 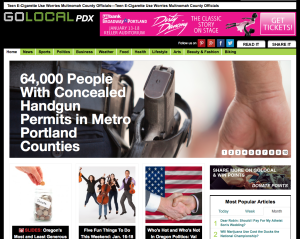 Portland’s GoLocalPDX has a lead news story on the growth of concealed carry permits in the Portland area.  Not enough information is presented in the article to determine the permit growth rate for all three counties, but Multnomah and Washington counties had a 41 percent growth in permits between 2011 and 2014 (42840/30429).  It appears as if the growth in Clackamas county was even much larger.

In Washington, Clackamas, and Multnomah Counties, there are a combined 64,308 active Concealed Handgun Licenses (CHL), according to the most recent available data.

The article also contained a discussion about the CPRC:

According to a 2014  report by the Crime Prevention Research Center, a gun law and public safety think tank, 194,162 people in Oregon carried concealed weapons as of July 2013. Roughly 6.3 percent of adults in Oregon have concealed carry permits compared to 4.8 percent of the population nationwide.

“Police are the single-most important factor for reducing crime,” Lott noted. “But they virtually always arrive on the crime scene after the crime.” He said allowing people – particularly women and the elderly — to carry weapons allows them to defend themselves against violent crimes.  Lott added that more people with permits to carry weapons do not pose a threat to public safety. “What you find is people with concealed handgun licenses tend to be extremely law abiding.” . . .

UPDATE: Guns.com also has a discussion of this same CPRC report this week.

With some 570,712 permits issued, Indiana has one of the highest rates of lawful concealed carry in the nation. According to a 2014 report from the Crime Prevention Research Center, only South Dakota has a higher percent of the eligible population that has a permit. A large part of this is due to the state’s historically low cost for permits, ranging from $10-$50 that include an option for lifetime carry. . . . .