Do Blacks trust the police more than whites or Hispanics do?

A recent Gallup survey shows 50% of blacks believe that black males are more likely to go to prison than white males primarily because of discrimination. By contrast, only 19% of whites agreed.  Blacks also indicate that they have less confidence in police and the criminal justice system than whites in other ways, though those differences are significantly smaller. Thirteen percentage points more blacks have very little/no confidence in police (25 percent versus 12 percent) and ten percentage points more feel that way about the criminal justice system (40 percent versus 30 percent). But on the honesty and ethics of police, the gap is even smaller – seven percent say it is low/very low (17 percent to 10 percent).

Other surveys, such as one from June 2013 by the Pew Research Center, show a similar pattern.

But there is a problem. What people tell pollsters isn’t always what they think.  If blacks don’t trust the police, they presumably won’t turn to them as frequently as whites when crime occurs. And there could be real costs to this reticence.  If criminals really believed that black victims are less likely to contact the police about crime, it might even encourage criminals to attack black victims.  Yet, blacks actually report violent crime to police at the same or a higher rate than either whites or Hispanics. 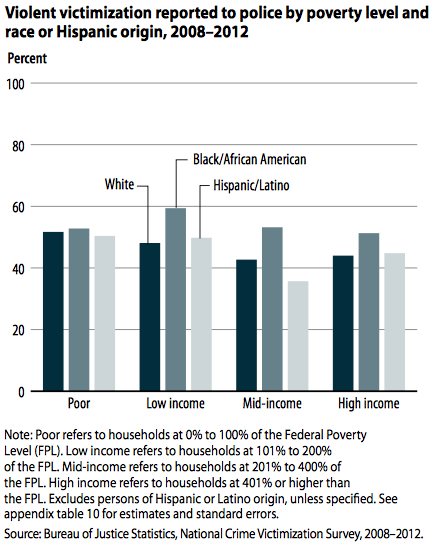 It is also possible to see the numbers broken down by income, race and location of residence.

UPDATE: After the riots in Baltimore in April 2015, the WSJ/NBC News Poll found this. 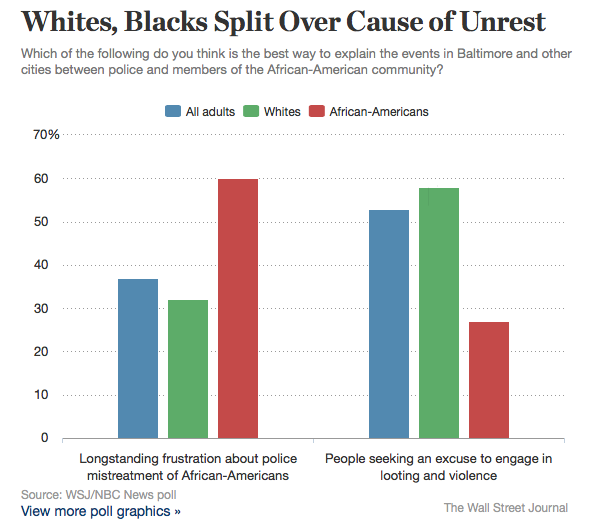 UPDATE: The American Enterprise Institute issued a report (click to enlarge screenshot).  Is it believable that blacks in 2008 thought that police discriminated more against blacks than in 1969 or 1972?

There is also some evidence that the protests over police in Ferguson and Baltimore were paid protestors (IBD, Fox News, and Front Page magazine).