CPRC at Fox News: What liberal media won’t tell you: School shooting deaths down, not up, across America

Is there an epidemic of school shootings? Parents are understandably fearful, but their fear is unjustified. Schools are relatively safe places, and they have gotten much safer.

While even one death is too many, the number of children killed in school shootings has declined over the last couple of decades. The drop is even larger than the overall decline in the murder rate.

Last week, Michael Bloomberg’s various gun control organizations exacerbated the fears by claiming that there were 74 school shootings since the actual Newtown school shooting in December 2012, and that something must be done. But Bloomberg’s numbers were dead wrong. They inflated the number by including attacks that were off of school property and unrelated to the school, lone suicides well after school hours by adults, a justifiable defensive use of a gun and gang fights outside of school hours.

Last week, CNN investigated Bloomberg’s claim and said that over the previous 18 months, there had been 15 incidents where guns were brought onto school grounds in attempts to harm people.

But that is still a large number. A better measure is to focus on the amount of harm – the number of people killed – rather than the number of attacks.

On that front, things have improved dramatically over the last couple of decades. During the 2013-14 school year, there were three non-gang, non-suicide killings at universities, and three more at K-12 schools.

The most read opinion piece at Fox News (click to make picture larger). 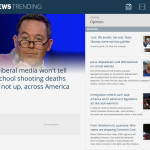