Another Planned School Shooting: Everything we have said about the planning, maximizing kills to maximize publicity, and the targeting of the school resource officer is true again here

How many more times do we have to hear the exact same story over and over again before we realize that these killers crave media attention? From the Times News (Kingsport, Tennessee) on June 12th:

. . . According to law enforcement officials, the teens intended to become the most notorious mass murderers of all time, with the highest body count.

They allegedly wanted to be famous, and their road to fame would be paved with the bodies of their classmates and teachers at Volunteer High School in Church Hill.

Authorities say the boys, who are now 16 and 17, even studied the 1999 Columbine school shooting, correcting “mistakes” made by those shooters for the purpose of maximizing the number of student and faculty deaths in their planned Volunteer High School massacre. . . .

The plan included killing the school resource officer first, and outlined where the maximum number of students could be killed — in the lunch room and hallways. . . .

Here is a copy of the story that appeared in the Knoxville News-Sentinel (click to enlarge). 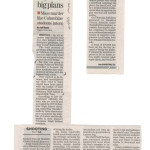