CPRC at Fox News: “What the Supreme Court still doesn’t understand about guns”

In what’s being hailed by many as a victory for gun-control advocates, the recent Supreme Court decision on “straw” purchases of guns has completely muddled the whole issue of background checks and “straw” purchases for potential gun owners.

The court ruled 5-4 that, as The Hill.com put it, “one legal gun owner may not acquire a firearm on behalf of another — a practice known as “straw” purchasing.

The case heard by the high court involved a Virginia police officer, Bruce Abramski, who bought a gun, a Glock 19 handgun, for his uncle. The police officer, who could get a discount on guns, bought the gun in Virginia. He then transferred it to his uncle, who lived in Pennsylvania, through a second licensed dealer in the state.

The Obama administration successfully prosecuted Abramski for two felonies. The Justice Department said that the same federal background check form where Abramski indicated that he wasn’t a straw purchaser involved perjury as well as for providing false information to the gun dealer who sold the gun.

The five Justices who supported Obama’s prosecution, claimed: “That information helps to fight serious crime. When police officers retrieve a gun at a crime scene, they can trace it to the buyer and consider him as a suspect.”

The rest of the piece is continued here.
The piece was the still the most read on the opinion page a day after it was posted. 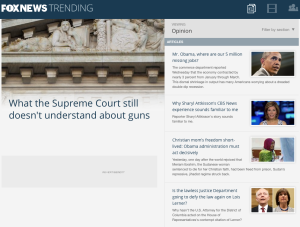