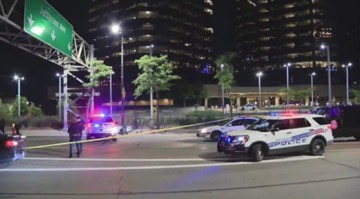 Detroit police sources say the man was in an SUV and was upset with the cyclists riding on Jefferson.

He shouted at them and one of the cyclists shouted back, prompting the man to get out of the SUV and confront the vocal cyclist with a knife.

The cyclist’s girlfriend, who was an armed, Concealed Pistol License holder, fired a single shot killing the man. Detroit police placed her under arrest.

Attorney and firearms expert Terry Johnson said he believes the shooting was justified.

According to officials, a man now identified as 38-year-old Robert Blackwater was armed with a gun when he walked into the convenience store around 2:40 a.m. and attempted to rob it. The suspect fired several shots at the clerk. The clerk was able to escape through a back door and was not injured.

At that moment, police say a victim, identified as 35-year-old Joseph Toki, walked into the store and was fatally shot by Blackwater.

A second victim and friend to Toki was waiting outside in his car, police said. Blackwater then exited the store, noticed the friend, and started shooting at him.

Police say the friend was shot as he got out of the car and returned fire using his own gun. Blackwater was struck and died at the scene…

According to a release, 44-year-old Patricia Molina approached a group and asked them to quiet down.

This led to her being punched in the face by Samuel Ozuna, 24.

According to the release, the 24-year-old male is now facing charges of Aggravated Assault.

Authorities said the man was waiting to be seated inside the restaurant when a man drove into the parking lot, got out of his pickup truck and opened fire, killing 52-year-old Matthew Bowersox of Mifflinburg and 46-year-old Heather Campbell of Trevorton.

The restaurant customer, who is licensed to carry a firearm, shot and wounded Fernanders as he walked back to his pickup truck. “Thankfully, he helped prevent further bloodshed,” Piecuch said…

Dallas police told Fox News on Sunday that the suspect, who was still at large, was among three men who weren’t let in to the bar on Riverfront Boulevard which was at full capacity because of coronavirus rules.

Police said he went to his car and came back with an “assault-type weapon.” The bouncer, who had denied the man entry, secured the doors.

The suspect, cops said, fired into the building, causing the reported injuries.

The alleged shooter then went to the back of the bar where he was “confronted by armed patrons,” and they fired upon the suspect.

The shooter left the bar before cops arrived at the scene…

The robbery happened “in the back parking lot” of the travel center, according to a press release from Sheriff Scott Chitwood.

A Pilot employee told a reporter it happened around 9 or 9:30 a.m. when the four men approached the truck driver about buying or selling tires. The employee said three of the men tried to hold the man while the fourth grabbed a bag with cash in it.

“The truck driver was strong-armed by four white male assailants,” according to the press release. “During the struggle, the victim retrieved a handgun that he had on his person and attempted to counteract the robbery by shooting at one of the assailants. Once the victim commenced shooting, all the assailants dispersed.”…

The press release said there were no injuries.

Charles Oliver, “1 man in jail, 3 others wanted after robbery of trucker at the Pilot Travel Center,” Daily Citizen-News, July 28, 2020.

Officers were dispatched to the 800-block of E Main Street in Klamath Falls after a 911 call reporting that a man had been shot outside of a convenience store. They arrived to find 29-year-old Taylor Reed Jackson suffering from gunshot wounds to the right shoulder and right leg.

Detectives investigating the shooting discovered that Jackson had fired several times at a vehicle driven by his girlfriend, KFPD said. The woman was not injured in the shooting, but multiple rounds struck her vehicle.

During the shooting, KFPD said that a “legally armed citizen” saw Jackson firing at the vehicle and decided to intervene, shooting Jackson twice and silencing the gunfire. According to the agency, Jackson then tried to hide his own handgun, which was later recovered by the detectives…

According to officials, the suspects walked into the business, pointed guns at the cook, and demanded money.

No injuries were reported…

Officials said the two suspects entered the store and one started smashing glass display cases while the other suspect started grabbing jewelry.

That’s when a store employee pulled out his concealed firearm and shot at both suspects, police said…

Officers responded to the scene and began to give the suspects medical aid, and both suspects were taken to a nearby hospital where their conditions were unknown…

The robbery happened at around 11:35 a.m. at New Carrie’s Corner Market at 4500 Athlone Avenue in the O’Fallon neighborhood. A man entered the store, pointed a gun at two victims and demanded money from the cash register, the St. Louis Metropolitan Police Department said.

As one of the victims, a 55-year-old man, was getting money out of the register, a 46-year-old woman pulled out her own gun and fired shots at the suspect…

Neither victim was injured during the robbery.