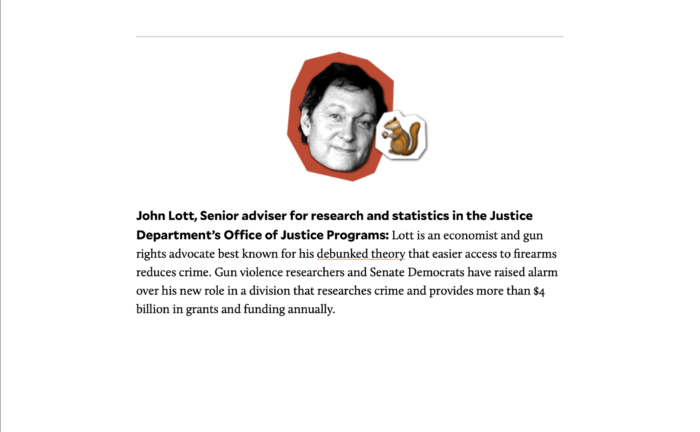 Mother Jones has never been know for its accuracy, and it surely isn’t going to start now. In a new article on February 1st titled, “Trump May Be Gone, But He Left Plenty of Lackeys Behind. Here Are Some of the Worst. How last-minute appointments will keep Trump’s stench alive,” Mother Jones lists CPRC President John Lott as the 5th worst “Lackey” left behind by the Trump Administration. Of course, Lott was a political appointee, and he left the administration on January 20th, but, unlike Michael Bloomberg’s The Trace and various higher-ups in Bloomberg’s gun control groups, Mother Jones’ writer apparently doesn’t subscribe to the CPRC’s email list.

Last December, Lott obtained the notable distinction of getting all the Democrat Senators on the Senate Judiciary Committee to write a letter demanding to know why the US Department of Justice hired him as the Senior Advisor for Research and Statistics, Office of Justice Programs. Gun control organizations were outraged at his hiring and bombarded the White House and Department of Justice with emails demanding his firing. Some of the other news coverage is available here.