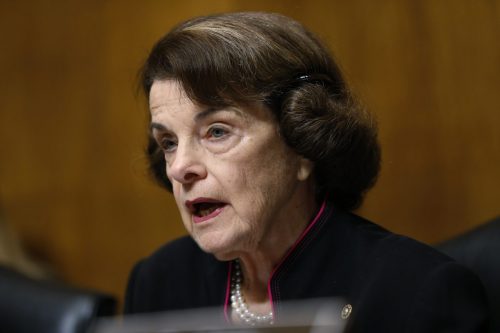 From America’s 1st Freedom, Bearing Arms, and Mike the Gun Guy to multiple articles in Michael Bloomberg’s The Trace. Both all the Democratic US Senators on the Senate Judiciary Committee wrote to Attorney General Bill Barr and powerful House Committee Chairs wrote a letter to the Comptroller General of the United States about John Lott’s appointment to the US Department of Justice. While the Democratic Senators explicitly focused on Lott’s appointment, according to Bloomberg’s The Trace, the House chairs were focused on Lott even though they didn’t mention him by name.

. . . Now nine U.S. Senators—including Sens. Dianne Feinstein (D-Calif.), Richard Durbin (D-Ill.), and Amy Klobuchar (D-Minn.)—have sent a letter to Attorney General William Barr demanding information on Lott’s hiring. The letter calls Lott “a pro-gun advocate who claims that widespread gun ownership can reduce crime.” This is nothing more than an ideologically motivated slur. Lott is a researcher and an academic who has taught at many universities. His peer-reviewed research has clearly shown that gun ownership tends to reduce crime.

These senators want to know if Lott is a political appointee or if he is serving in a “career civil service position.” The intent of this is clear: They want to know how easy it will be to fire him, so they can thereby protect money going to anti-Second Amendment research, if Joe Biden is sworn in as president on January 20.

They also want Barr to give them a list of “all individuals who held positions as political appointees since January 20, 2017, and are now employed in permanent competitive positions, non-political excepted service positions, or career Senior Executive Service (SES) positions at the Department and its components.”

These senators clearly want a list from the DOJ so they can target and remove people who came in during the Trump administration. As with Lott, they want to cancel these people, too. . . .

With Attorney General Bill Barr about to leave the Department of Justice before Christmas, Politico ran a story on how Barr is going to close out his term: “How will Barr close out his time at Justice?” What is the media’s #1 concern for his remaining time in office? Under the topic of “Personnel,” it is the CPRC’s former president John Lott.

In October, a controversial economist who has long promoted more widespread gun ownership, John Lott, was hired at the Office of Justice Programs as a senior adviser for research and statistics. He’s been the target of complaints from congressional Democrats, who’ve criticized his research methods and disputed his findings. . . .

Josh Gerstein and Kyle Cheney, “How will Barr close out his time at Justice?” Politico, December 15, 2020.

Justice Department observers are watching to see whether William Barr’s final days as attorney general produce new hurdles for Biden appointees who will take the keys on Jan. 20, Politico reports. The end of an administration typically brings a wave of departures. Curious late-term arrivals have prompted questions about whether the Justice Department has surprises in store. Controversial economist John Lott, who has long promoted more widespread gun ownership, was hired at the Office of Justice Programs as a senior adviser. He’s been the target of complaints from Democrats.

Staff, “What Legal Controversies Will Barr Leave for Biden?” The Crime Report, December 16, 2020.

When word first broke that Dr. John Lott had left the Crime Prevention Research Center and was currently a researcher at the Department of Justice, I wondered how long it would be before Democrats targeted him for dismissal. Now we have our answer: not long at all. Nine Senate Democrats have penned a letter to Attorney General Bill Barr demanding answers to their questions about why the pro-Second Amendment academic and author of books like More Guns, Less Crime ended up at the DOJ. . . .

The hiring of Lott wouldn’t raise any eyebrows except for the fact that he supports the Second Amendment. Why should it be a problem if Lott’s research has led him to believe that increased gun ownership can lead to less violent crime? Do these senators really believe that research should be ignored in favor of an ideological litmus test that demands all DOJ employees embrace the idea that restrictive gun control is the answer to reducing violent crime? . . .

The letter goes on with demands to know the status of Lott’s hiring as well as a list of all political appointees hired since 2017 who are now in civil service positions, asking Barr to deliver his response in writing by December 22nd.

I’m hoping Barr’s response is a short and sweet, “Go pound sand,” but he may have already sent the Senators another message. A picture says a thousand words, after all

Maybe the AG doesn’t need to tell the Senate Democrats to pound sand after all. He could just send them each an autographed copy of this picture.

This past week, nine members of the Democratic Senate caucus sent a letter to the Attorney General requesting information “on the completed and potential conversions to civil service positions at the Department and its components.” You can read the entire letter here.

The letter was sent by Dianne Feinstein and was co-signed by the usual gaggle of Senators who always co-sponsor Dianne’s annual attempt to get rid of assault rifles, a move that I suspect may actually get some traction in the upcoming Senate term.

This letter, however, had nothing to do with assault rifles. Rather, it was an attempt to undo an appointment to the Department of Justice’s Office of Justice Programs, in this case the appointment of none other than the infamous and notorious John Lott.

What makes John Lott such a lightning-rod for the anger and advocacy of the Gun Violence Prevention crowd, a.k.a., GVP? To quote from Feinstein’s letter, Lott is a “pro-gun advocate who claims that widespread gun ownership can reduce crime.” In other words, he’s the mastermind behind all those guns being bought during the Covid-19 year, he’s the reason why companies like Smith & Wesson can’t ship enough products to satisfy demand, he’s the pied piper of Gun-nut Nation leading the armed forces of liberty and justice forward in the MAGA crusade.

Am I being somewhat too self-righteous in my description of how the GVPdescribes Lott?  I don’t think so. If anything, I’m actually being somewhat charitable in what I believe is nothing more than a cynical and mis-informed campaign conducted by gun-control advocates and researchers every time that Lott’s name appears.

Here’s what our friends at The Trace have to say about Lott’s research: “Respected academics have repeatedly discredited Lott’s work.” Who are some of these ‘respected’ academics? One of them is John Donohue, who co-authored a paper claiming that the decline of violent crime in the 1990’s was due to the ability of inner-city women to abort unwanted kids. Another ‘respected’ academic is Daniel Webster, who along with the head of gun research at RAND, stated (under oath) at a Congressional hearing that he didn’t support national gun registration, even though he has supported this idea both verbally and in print.

I’m not saying that John Lott’s research is flawless, I’m not saying that he isn’t promoting a pro-gun agenda. What I am saying is that the continued attempts to defame him personally and professionally is nothing more than a McCarthyite tactic indulged in by GVP advocates and researchers who have been unwilling to confront the fundamental issue which John Lott has raised. . . .

In a letter to Attorney General William Barr, the Democratic members of the Senate Judiciary Committee are seeking details on the nature of Lott’s position and the circumstances of his hiring, as well as a list of political appointees moved into civil service roles by the Trump administration. Senator Sheldon Whitehouse of Rhode Island, one of the signatories, said in an email, “John Lott burrowing into the civil service at the Justice Department shows how the Trump administration is working behind the scenes to undermine President-elect Biden and his team.” The senators set a December 22 deadline for responding. — Jennifer Mascia, news writer

Democratic lawmakers press for transparency on Trump appointees. A group of senators and representatives have sent a letter to the Government Accountability Office requesting information on how many political appointees have been converted to career civil service positions during the last four years. The lawmakers didn’t mention any appointees by name, but their missive follows a demand earlier this month from Senate Democrats seeking answers about the Justice Department’s recent hiring of discredited gun researcher John Lott.Gun violence experts told us they’re concerned Lott may use his post to bury or distort crime data.