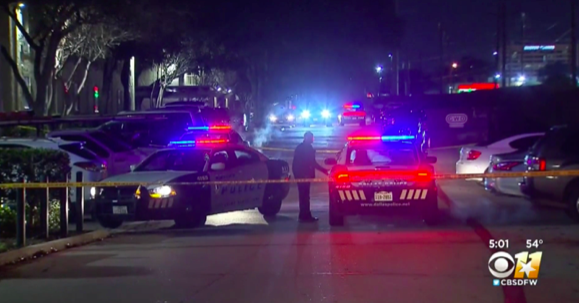 Police said the owner caught the suspect, who is in his 50s, trying to steal property behind the business.

The store owner grabbed his gun and confronted the suspect, according to a sergeant at the scene.

An altercation occurred and the store owner shot the suspected burglar in the leg. He was taken to University Hospital, where he is expected to recover.

A 30-year-old man fired shots at and struck a would-be robber Sunday in Austin on the West Side.

About 4:45 p.m., he was exiting a business in the 5200 block of West Chicago Avenue when he was approached by two men, one of whom pulled out a handgun and demanded his property, Chicago police said.

The man, who is a valid concealed carry license holder, pulled out his own handgun and fired shots toward the armed man, police said. The armed man then ran in an unknown direction.

Upon arrival, an employee flagged down the deputies and said while he was at the register, a masked man entered and pointed a rifle at him, ordering him and the patrons to the ground, according to the report, which does not state the time of the robbery.

A second masked suspect entered the business holding a handgun and while the employee and customers were held at gunpoint, began taking cash from the register and then went to the back of the business looking for more cash, deputies say.

The two suspects left the business and the employee followed them out to see which direction they were going and to get a possible description of their vehicle, the report states.

A male clerk who was on duty at the time fired a shot striking and killing the alleged robbery suspect with a handgun he had in his possession.

A man walking on Detroit’s west side was carrying his gun and his CPL when someone tried to rob him. He used his gun and the attempted robber in the street.

Police were called around 6:45 to the 18600 block of Grayfield to the shooting. A 25-year-old man was walking when an armed man tried to rob him.

The victim has a concealed pistol license and pulled his gun. Both men shot at each other and the robbery suspect was hit in the body.

The store manager and his child were opening up Jordan’s Kwik Stop on Sebastian Street around 5:45 a.m. Thursday when a man with a gun forced them inside. The man reportedly said “let me get everything” and held them at gunpoint.

According to police, the store manager said, “OK, hold on, let me get it for you,” then grabbed a gun and shot the suspect twice during a shootout….

One person is dead and another is injured after a store clerk shoots two robbery suspects….

According to Amarillo Police, the two suspects walked into the store with a rifle and attempted to rob the clerk.


APD said the clerk had a handgun and shot both suspects.

According to police, two 15-year-old suspects allegedly tried to rob the Papa John’s pizza delivery driver at gunpoint, but the driver had a gun and shot at them to fend them off. Police said he was licensed to carry…

The incident was reported about 2 a.m. at a Sunoco gas station on Craft Avenue, near UPMC Magee-Womens Hospital.

Police say Farkosh claimed he shot on the men in self-defense and has a valid permit to carry.

A robbery suspect was killed and the victim is injured after a shootout at a Valero gas station near George Intercontinental Airport. Deputies say the shooting appears to the result of an attempted robbery.

Deputies confirm the man who killed the armed robber is a licensed concealed handgun owner.

Lansing police received a report of shots fired about 9:30 p.m. both inside and outside a Hooters in the 17000-block of Torrence Avenue…

When officers arrived, they learned the shooting occurred in the parking lot and not inside the restaurant.

An unidentified individual had begun shooting at two people, as they exited Hooters, police said.

One of the people being shot at has a valid concealed-carry permit and returned fire. A “brief exchange of gunfire” took place before the alleged shooter fled in a silver vehicle.

The pair tried to steal a woman’s car about 7:15 a.m. Dec. 30 in the 4800 block of North Moody Avenue, police said. A concealed-carry license holder who knows the woman fired shots at them, but no one was injured.

Both suspects ran away after the man shot at them, but were taken into custody later that day, police said.