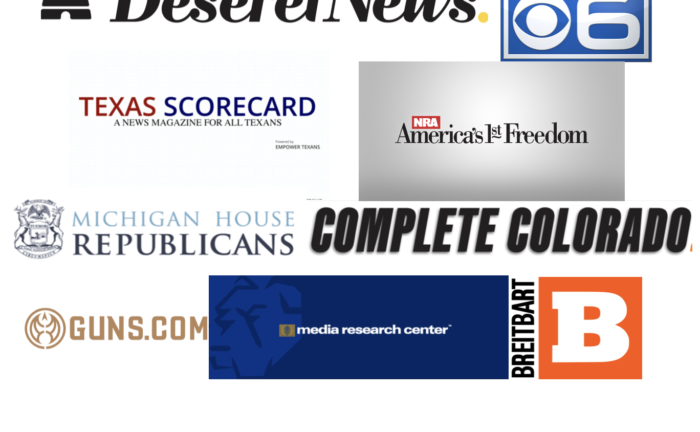 It’s not true that guns are the most successful way of committing suicide, listing other methods that he said are just as lethal. If people are actually concerned about suicide, taking a gun is not a very serious way of dealing with it, said Lott, the author of “More Guns, Less Crime” and “The War on Guns.”

“One need only ask Jeffrey Epstein, I guess, about whether or not those other methods are successful,” Lott said, referring to the wealthy financier and convicted sex offender who apparently hanged himself in a New York jail cell in August. . . .

More people are getting their concealed handgun license, and the Pacific Northwest is no exception. The pro-gun Crime Prevention Research Center (CPRC) is making headlines by stating the number of concealed handgun permits has increased for the third year in a row, to more than 18.66 million.

The newly released study won’t surprise Bryan Mumford, CEO and lead instructor at PDX Arsenal. He said he has helped more than 13,500 Oregonians get their CHL in less than a decade.

Pertinent to the Virginia Beach shooting was the fact it occurred in a part of the building that was mandated gun-free for city employees. This means the gunman had every advantage, with or without a suppressor, inasmuch as his victims could not shoot back.

The Crime Prevention Research Center examined mass public shootings for the time period of 1950 to May 2018 and found that 97.8 percent of them occurred in gun-free zones. Yet Warren’s to-do list for ending gun violence says nothing about abolishing gun-free zones so Americans can exercise their Second Amendment right to self-defense. . . .

A plan introduced by state Rep. Gary Eisen would make businesses and government entities with gun-free policies liable if a shooting takes place on their grounds.

Eisen, of St. Clair Township, said gun-free zones have become targets for mass shootings because criminals who have no regard for the law know that law-abiding citizens are defenseless in these areas. According to the Crime Prevention Research Center, 98.4 percent of the mass shootings that occurred between 1950 and July 2016 happened in gun-free zones. . . .

A new report from the Crime Prevention Research Center analyzes the spread of legal concealed carrying of firearms nationwide. There has been a 304% increase in concealed carry permitting since 2007. In 2018 alone more than 1.8 million new permits were issued nationwide.

The September report says that Colorado, with more than half a million permits issued, is eleventh on the list of all states by percentage of people with concealed carry permits at at 11.29%.

Top of the list as a percentage of population is Alabama, where more than 26% of residents have permits as of June 2019. . . .

Last month, researcher John Lott of the Crime Prevention Research Center published annual data on the number of Americans availing themselves of their Second Amendment rights via concealed carry permits. The new data is here, while data from the previous five years can be found here.

What do the numbers show? That as governments seek to unconstitutionally abridge this right, growing numbers of Americans are seizing it.

You read that right … America has experienced a 304 percent increase in the number of concealed handgun permits issued within the last dozen years.  From 2018 to 2019, the number of permits increased by eight percent.

Also encouraging?  These numbers do not include a growing number of states which do not require permits to legally carry firearms.

“Because of these constitutional carry states, the nationwide growth in permits does not paint a full picture of the overall increase in concealed carry,” Lott noted.  “But some residents still choose to obtain permits so that they can carry in other states that have reciprocity agreements.”

All told, 7.3 percent of American adults have permits. Not including anti-gun states California and New York – America’s No. 1 and No. 3 states in terms of population, respectively – that percentage climbs to 8.75 percent. . . .

Long-standing work conducted by John Lott, and published on the Crime Prevention Research Center website and in his book, “More Guns, Less Crime”, shows that the presence of more arms among a population is highly correlated with decreases in violent crime, while the elimination of legal means to carry guns sees a correlated increase in violent crime. Lott’s voluminous research also is backed up by a Centers for Disease Control study that showed that firearms owners were between 1.8 and three times more likely to stop crimes with firearms than to engage in crimes with firearms. . . .

Michigan currently requires training, a background check with fingerprints and a $100 application and licensing fee to obtain a concealed pistol license (CPL), a process that can take weeks. The state had 660,920 active CPLs as of August according to statistics from the Crime Prevention Research Center. . . .

“Gun control” advocates are avoiding this like an ugly dog: The Crime Prevention Research Center (CPRC) recently released its 2019 update on concealed carry in the United States, and it’s not the kind of news the anti-self-defense crowd cares to acknowledge.

According to the CPRC, the number of people with concealed carry licenses or permits increased by “about 1.4 million.” This spike brought the total estimated number of licensed citizens to 18.66 million, a whopping 304 -percent increase over the past 12 years. . . .

“The steps this committee needs to take to prevent credible threats to the public are to request a call for a special session, pass constitutional carry, and eliminate gun-free zones, because according to the exhaustive data by the Crime Prevention Research Center, 96 percent of the mass shootings are happening in gun-free zones—Victim Disarmament Zones.”

But, given the mainstream media apathy for this topic, you’d think the fact that good guys with guns save lives is a new concept. It’s not. Twenty years ago, John Lott, author of More Guns, Less Crime, and his research partner wrote: “We find that allowing citizens to carry concealed weapons deters violent crimes and it appears to produce no increase in accidental deaths. If those states which did not have right-to-carry concealed gun provisions had adopted them in 1992, approximately 1,570 murders; 4,177 rapes; and over 60,000 aggravated assaults would have been avoided yearly.” . . .