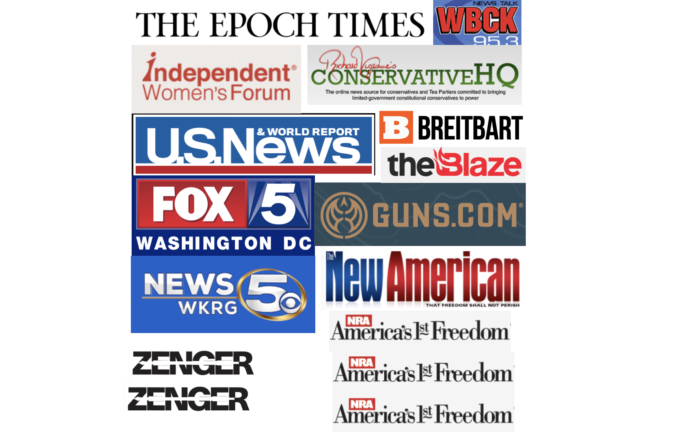 Banning all guns, including concealed weapons, would affect a significantly higher number of people, says Dave Workman, communications director for the Second Amendment Foundation and a senior editor for the group’s publication, Gunmag.com. About 17 million Americans have concealed carry permits, according to a tally from the pro-gun Crime Prevention Research Center. . . .

Even as the topic of gun control continues to remain a focus in the Democratic 2020 presidential primary, more Americans than ever are believed to have obtained permits.

In a report released this week, the Crime Prevention Research Center says there are now nearly 19 million Americans with permits to carry a concealed handgun – an increase of 1.4 million, or about 8 percent – from around this time last year. . . .

A new report into the number of concealed carry permit holders announced this week found the numbers at an all-time high even as 16 states recognize permitless or constitutional carry.

The 62-page report, compiled by the Crime Prevention Research Center, shows that 1.4 million more permits and carry licenses were issued in the last year, bringing the number of active holders to some 18.66 million. This represents an 8 percent growth from 2018’s figures and a serious 304 percent increase since 2007. . . .

Lott, the founder and president of the Crime Prevention Research Center, a think tank headquartered in Alexandria, Virginia, said Eisen is on the right track.

“I think it’s a useful idea,” he told The Epoch Times.

If private-property owners want to ban firearms on their premises “they should bear the costs of their decision,” said Lott, author of the book, “More Guns, Less Crime.”

The idea could catch on nationwide eventually, he said, adding, “I think these things are a gradual process.”

Since 1950, 94 percent of mass public shootings in the United States have taken place in gun-free zones, according to the Crime Prevention Research Center.

The number of Americans with a concealed carry license has tripled in the last 12 years, according to a new report from the Crime Prevention Research Center.

The reports says there are 18.66 million Americans with concealed carry permits. That’s an 8-percent increase in the last year.

The reports says 7.3% of American adults have permits. Outside of California and New York, the figure jumps to 8.75% of the adult population.

Alabama has the highest rate — 26.3%. Indiana is second with 17.9%. Florida has more than two million permitted carriers. Georgia, Pennsylvania, and Texas also have more than one million. . . .

We all know that mass shooters all have one thing in common besides having mental problems and that is they look for gun free zones to commit their heinous crimes.  They know that governments and business that dictate gun free zones are a safe place for them to commit their butchery.  In fact there are a growing number of people and groups that say that these governments and business are becoming accomplices in their acts because they provide that safety for these people.

Before I explain what this Michigan State Representative is doing you must know that according to the Crime Prevention Research Center’s updated 2014 report 98.4% of mass shootings between 1950 to July 10, 2016, happened in gun-free zones.

If passed by the House and Senate and then miraculously signed by the Governor House Bill 4975 would revoke governmental immunity from lawsuits emerging from injuries that occurred on government property where guns are banned.

State Representative then goes one step further and sponsored House Bill 4976.  HB 4976 would make any state government, business or individual that designates a property a gun-free zone responsible for the safety of individuals who enter it.

Read More: Michigan Rep Sticking Up For Us Vs Gun Free Zones | https://wbckfm.com/michigan-rep-sticking-up-for-us-vs-gun-free-zones/?utm_source=tsmclip&utm_medium=referral

The year-over-year increase is approximately 8 percent.

The Crime Prevention Research Center is a non-profit organization that bills itself as a “research and education organization” that is “dedicated to conducting academic quality research on the relationship between laws regulating the ownership or use of guns, crime, and public safety.”

Indiana comes in second with 18 percent, and South Dakota in third at 16 percent.

The report states, “Sixteen states have adopted constitutional carry, meaning that a permit is no longer required, [but] some people in these states still choose to obtain permits so that they can carry in other states that have reciprocity agreements with their states.” . . .

A report from the Crime Prevention Research Center (CPRC) shows there 1.4 million more concealed carry permit holders than there were in 2018.

The CPRC report shows that four states have over one million permit holders each. Those states are Florida, Georgia, Oklahoma, and Texas. It also shows that eight states which kept gender-based data “from 2012 to 2019…[saw] permits for women growing 101% faster for women than those for men.”

Interestingly, concealed carry permit holders are the most law-abiding segment of society, even more so than police. According to criminologist John Lott, CCW permit holders are convicted of misdemeanors and felonies at one-sixth the rate of police officers, who are themselves a more law-abiding group than the general population.

Dr. John Lott does not want to stagger the rollback of gun-free zones. He wants them gone overnight.

Lott recently testified to congress on the varying levels of effectiveness legislators could expect from commonly proposed gun laws. The Crime Prevention Research Center, a research and education organization that performs academic-level research on the “relationship between laws regulating the ownership or use of guns, crime, and public safety.”

In an interview with Zenger News, Lott expanded on his research and the need for swift reversals of so-called gun-free zone policies. . . .

Democrats aren’t waving the white flag on efforts to implement new gun laws. In fact a new push from progressive lawmakers would create “Red Flag” laws designed to prevent individuals deemed at risk from purchasing guns. Though critics feel such laws are redundant, such laws seeks to give authorities the right to temporarily remove legal gun owners’ firearms due to a suspicion that they may hurt themselves or others.

“There already exists laws to deal with people who are deemed a danger to themselves or others — so-called Baker Acts or 302s,” said John Lott, president of the Crime Prevention Research Center, Lott in an interview with Zenger News. “Unlike these existing laws, Red Flag Laws do not provide the same mental health or legal protections and the only mechanism allowed to the judge under Red Flag Laws is to take away a person’s guns.” . . .

In a conversation with John Lott, head of the Crime Prevention Research Center, then-president Democrat Barack Obama said, “I don’t believe people should be able to own guns.”

Lott’s testimony, meanwhile, seemed like the chapter of a history book from David McCullough. It was a long, detailed and heavily footnoted document.

So right there, before the hearing even began, was a stark juxtaposition of reason vs. emotion and misinformation.

The hearing began with Vice Chair Carolyn B. Maloney (D-N.Y.) pointing to a poster-sized chart showing (or rather purporting to show) that U.S. homicide rates far surpass other “high-income nations.” (Lott later wouldn’t endear himself to the very anti-gun Maloney by pointing out that her chart was based on very erroneous data.)

The gun-control representatives from Everytown and Giffords spoke first. They advocated for so-called “universal-background-check laws” and other gun-control laws, but didn’t add anything new to the debate.

Next came Hupp. After telling her story, she said, “Please consider the high-cost of gun control…. I reached for my gun, but my gun was 100 yards away dutifully left in my vehicle.… I can tell you that the cost of gun control was my parents and 23 innocent lives.”

Hupp asked rhetorically, “Why aren’t we seeing any of these mass murders at NRA conventions or at gun ranges?”

When later asked what Congress can do, Hupp said, “Rid us of gun-free zones.”

Lott did his testimony with a slide show. He covered a lot of ground in his five minutes, but when the clock on a wall by the entrance reached zero, Rep. Maloney stopped him.

Sen. Mike Lee (R-Utah) represented the Republican side and he did make pro-freedom remarks. Lee, however, had to leave to vote, and it was then that the hearing turned into a one-sided, anti-gun event.

Maloney, and other Democrats, asked questions of the gun-control representatives and ignored Hupp and Lott. Even when Skaggs (who is with Giffords) and Meins (with Everytown) attacked Lott personally, Rep. Maloney wouldn’t allow Lott to respond.

“You can put it in writing,” said Rep. Maloney to Lott as she waved away his attempt to defend himself.

“Other committees have let me reply when I’ve been attacked,” said Lott.

Not to be left out, Twitter has also banned and censored accounts. Most recently, Twitter blocked John Lott, the founder and CEO of the Crime Prevention Research Center (CPRC), for sending a tweet about the New Zealand killer’s real political views.

“Few academics look at such purely cross-sectional data, simply because it is impossible in that case to accurately account for differences across different places,” says John Lott, founder and president of the Crime Prevention Research Center (CPRC). “Lumping all the different gun-control numbers into one number is pretty arbitrary. Not only is there the issue of what gun-control laws to include, there is also the issue of how to weigh them.”