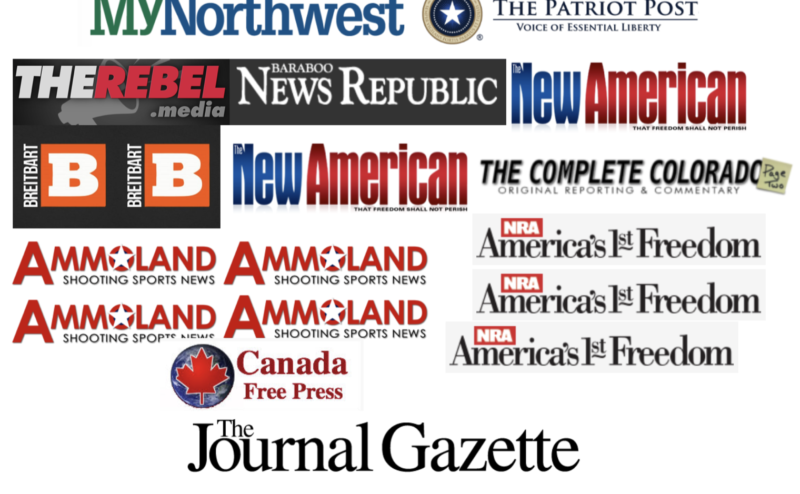 Crime Prevention Research Center in the News: MyNorthwest, Breitbart, The Rebel, News Republic and much more

He points to research from the conservative Crime Prevention Research Center, that says 98 percent of mass shootings since 1950 have happened in gun-free zones. Gun safety advocates dispute that research, but Gottlieb says there are plenty of examples to back it up, such as recent shootings in schools, malls, and movie theaters among other public places.

“It’s really crazy when you go to the shopping mall or movie theater, and you’re licensed to carry and you’re trained, and you’re not allowed to have your gun to protect yourself,” he said. . . .

New Zealand was a liberal Democrat’s paradise of gun laws even before the Christchurch mosque massacre. The law required gun owner licensing, registration for certain weapons and universal background checks, according to John Lott. Yet the massacre happened. . . .

She blamed the Legislature for passing Concealed Carry back in 2011. Did the perp have a Concealed Carry Permit? Reported in an Aug. 10, 2016, Daily Wire story, “A newly-released report suggests that concealed carry permit holders are the most law-abiding citizens in the U.S. The report, written by Crime Prevention Research Center president John Lott, notes it is “very rare for permit holders to violate the law. . . .

BuzzFeed News, which to its credit does have some reputable journalists, has a perfect rating. The site is best known for “lolcats” and “listicles,” but its news division should also be known for leaking the Hillary Clinton-funded and completely unverified anti-Trump “Russian dossier,” breaking a false report about Michael Cohen, and setting up a fake website to impersonate economist and pro-Second Amendment journalist John Lott. . . .

The tweet that prompted the ban included a link to Lott’s Crime Prevention Research Center website and noted that the New Zealand mosque shooter’s manifesto explicitly stated that his goal was to encourage gun control.

When Lott received the block on his account, he was not told exactly why he was banned for the tweet.

Following the Aurora theater shooting, Crime Prevention Research Center founder John Lott zeroed in not simply on the fact that the theater was gun free, but that the gun-free status was likely the strongest draw for the killer. Lott noted there were numerous other theaters close to the killer’s apartment, but the gun-free status of the Cinemark theater set it apart:

The Second Amendment Foundation (SAF) is launching a campaign designed to call attention to the fact that gun-free zones are a “maniac’s shooting gallery.”

SAF points to a Crime Prevention Research Center study showing 97.8 percent of mass public shootings between 1950 and May 2018 occurred in gun-free zones.

Distasteful as it may be to gun deniers, a new study from the Crime Prevention Research Center proves that armed staff prevents school shootings. The Center analyzed nearly 20 years of school attacks in hundreds of school districts with armed school staff. They found well-trained, volunteer staff – janitors, teachers, coaches — have kept children safe for two decades without firing a single shot. That’s because would-be shooters may be crazy but they’re not stupid. It’s simple. Killers don’t want to be killed before they kill innocent children, so they stay away from schools with defenders, and attack schools with “NO GUNS ALLOWED” signs out front.

The report’s conclusion notes : “There hasn’t been a single mass public shooting in any school that allows teachers and staff to carry guns legally. Since at least as far back as January 2000, not a single shooting-related death or injury has occurred during or anywhere near class hours on the property of a school that allows teachers to carry.” . . .

Massie referred to a gun study by researcher John Lott while expounding on the necessity of his bill: “Gun-free zones are ineffective and make our schools less safe. [According to Lott] 98 percent of mass public shootings since 1950 have occurred in places where citizens are banned from having guns. Banks, churches, sports stadiums, and many of my colleagues in Congress are protected with firearms. Yet children inside the classroom are too frequently left vulnerable.”

Massie said his bill “would repeal the Gun-Free School Zones Act, eliminating the one-size-fits-all federal ban on guns in school zones, making it easier for state and local governments and school boards to unambiguously set their own firearms policies.”

The New American reviewed Lott’s study titled “Schools that Allow Teachers to Carry Guns are Extremely Safe,” in which the researcher wrote: “There has yet to be a single case of someone being wounded or killed from a shooting, let alone a mass public shooting, between 6AM and midnight at a school that lets teachers carry guns” since at least January 2000.

Lott examined every school shooting from 2000 through 2018 and learned that not a single school that allows teachers to carry has experienced a death or an injury from a shooting. On the other hand shootings at schools and campuses where teachers and staff are unarmed have “increased significantly  doubling [in number] between 2001 and 2008 versus 2009 and 2018.” In those shootings, 193 people died and another 267 were wounded. . . .

Irrefutable is the conclusion that John Lott, founder and president of the Crime Prevention Research Center and author of More Guns, Less Crime, arrived at in 1998. He has updated his work in subsequent printings of his book that confirmed his conclusions. Those conclusions have been confirmed and validated elsewhere. . . .

John Lott has written that minorities in high crime urban neighborhoods benefit the most from an increase in concealed carry permits. Maybe Representative Ford has read some of John Lott’s research. Maybe it is a classic case of a liberal changing their view when confronted with reality. . . .

I’d like to thank the Crime Prevention Center and Dr. John Lott for making the raw statistics available. …. The left is entitled to its own opinion, not it’s own facts.

It’s the same argument used to defend so-called “victim disarmament zones” across the country. The overwhelming majority of mass shootings in this country have occurred in “gun-free zones,” according to the Crime Prevention Research Center, which studied mass public shootings.

He pointed to mass shootings at schools, shopping malls, movie theaters and churches as prime examples where “gun-free zone” designations did not prevent tragedies, but may actually have enabled crazed killers by making it impossible for the victims to fight back. . . .

This study doesn’t do anything like that, but instead compares apples to oranges.

“Few academics look at such purely cross-sectional data, simply because it is impossible in that case to accurately account for differences across different places,” says John Lott, founder and president of the Crime Prevention Research Center (CPRC).

Good examples of flawed cross-sectional analyses include attempts to compare homicide rates in the U.S. to those in the United Kingdom (U.K.). Both nations record crime data in very different ways. The U.K. basically won’t officially count a homicide until after a case has been adjudicated. This could be years later. They also may leave out homicide data purposely; for example, when a U.K. doctor allegedly murdered more than 200 of his patients, and a jury found him guilty of 15 of the murders in 2000, the British homicide statistics were not adjusted to include this data. The U.K. also doesn’t accumulate the data the way the FBI does for its “Uniform Crime Reporting Program.” The homicide data from the U.K. and the U.S. simply aren’t comparable; actually, when doing research for my book The Future of the Gun, I found that Scotland Yard officially says the U.K’s national data is not comparable.

Back to this study in Pediatrics, Lott also says, “Lumping all the different gun-control numbers into one number is pretty arbitrary. Not only is there the issue of what gun-control laws to include, there is also the issue of how to weight them. Is a three-day waiting period on buying guns the same as background checks on private transfers or a ban on open carrying of guns? Just adding up the number of laws in a state assumes that all the laws have the same importance.”

Rather than lumping all the laws together, Lott’s book, More Guns, Less Crime, for example, examines 13 different types of gun-control laws and accounts for differences in things such as the length of waiting periods, the yearly cost of concealed-carry permits and more. . . .

In this case John Lott, president of the Crime Prevention Research Center and the author of More Guns, Less Crime, among other books, just had his account blocked by Twitter for sending the tweet: “New Zealand’s killer’s manifesto says that he did attack to get more gun control/gun bans in New Zealand and the US, Killer was a socialist, environmentalist who hated capitalists and trade.” Lott then put a link in to send people to a story on his website that explained, with more links, that his tweet is accurate.

Lott appealed and asked for more information. He received another reply saying he lost his appeal, but again didn’t answer why.

“Truth I suppose, is no defense,” says Lott. “I can and have proven that my tweet is factually accurate.” . . .

“It would have been great if one of the debate moderators had asked a tough question on guns. For example, could background checks on private gun transfers have stopped Parkland or any other mass public shooting? The answer, unfortunately, is that such a law wouldn’t have prevented a single attack in this century.” –John Lott, president of the Crime Prevention Research Center, said this after the Democrat’s first two debates.