Civilian apparently cut short attack at Second Christchurch Mosque, only 7 died at that Mosque versus 41 at other one

UPDATE: The original news reports suggested that a Muslim at the Mosque had run home (presumably very nearby) to get his gun to stop the attack. Well, new reports suggest something quite different happened. There are basic inconsistencies between the two reports.

The original reports suggest that the Muslim was able to fire the gun at the attacker, but the other articles suggest that he took the gun from the shooter and didn’t know how to fire it. Another major difference is that the original reports described the person who stopped the attack as “a well known Muslim,” whereas later reports had him as a “young guy who usually takes care of the mosque.” Here is the latest article from Fox News:

A survivor of Friday’s deadly mass shootings in New Zealand has spoken out about the moment his friend tackled the gunman and wrestled his weapon away from him as he opened fire on worshippers.

Syed Mazharuddin was praying at the Linwood mosque in Christchurch on Friday around lunchtime when a man wearing protective gear entered and began shooting at men, women and children inside. In the chaotic moments that followed, Mazharuddin said his friend found the chance to tackle the gunman and disarm him.

“The young guy who usually takes care of the mosque … he saw an opportunity and pounced on [the gunman] and took his gun,” Mazharuddin told the New Zealand Herald. “The hero tried to chase and he couldn’t find the trigger in the gun … he ran behind him but there were people waiting for him in the car and he fled.”

Though the news is inconsistent on what happened, it is clear that this individual stopped the attack. So it is disconcerting that the Prime Minister just dismisses this individual’s role. Here is a typical discussion in the New York Post.

A fourth person who had been arrested turned out to be a member of the public who was carrying a firearm “with the intention of assisting police,” the prime minister said.

From the New Zealand Herald.

Second shooting at mosque in Linwood

A second shooting happened at a mosque in the Linwood area of the city.

One Friday prayer goer returned fire with a rifle or shotgun.

A well known Muslim local chased the shooters and fired two shots at them as they sped off.

He was heard telling police officers he was firing in “self defence”.

“They were in a silver Subaru,” he told police.

This individual at the Linwood Mosque was apparently arrested by the police, though he was later released.

A fourth person who was arrested yesterday “was a member of the public who was in possession of a firearm but with the intention of assisting police,” she added. Ardern said that person has since been released. 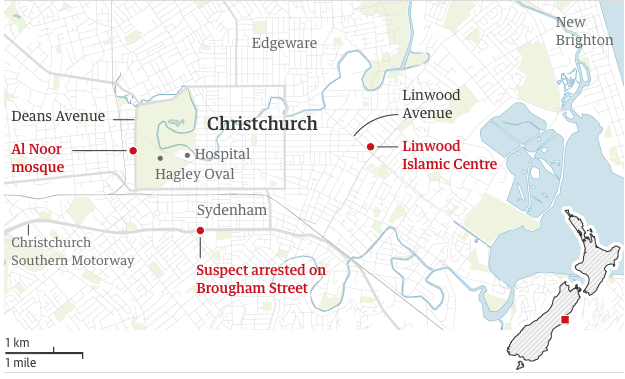 ← Media Politicize New Zealand Terror Attack, Blame Trump New Zealand killer's manifesto says that he did attack to get more gun control/gun bans in New Zealand and the US, Killer was a socialist, environmentalist who hated capitalists and trade →