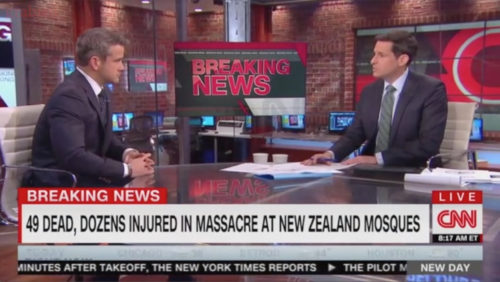 It is only too easy to find media who are blaming Trump for the mass public shooting in New Zealand on March 14, 2019. Below are transcripts of some CNN clips. Just one question to think about: If Trump is so responsible for these attacks, why is it that these attacks were becoming relatively more frequent in the rest of the world long before Trump became president? For data on that see here.

The Intercept’s Mehdi Hasan on CNN’s Don Lemon has this:

“I think to kind of talk about the story we talked about before in terms of Trump’s rhetoric as well. Western government has turned a blind eye to domestic terrorism, to domestic far-right terrorism. … So, this is not just about Trump but about politicians especially on the right taking seriously this problem and really being careful about their language at the very minimum.”

CNN’s John Berman then agreed that the attack is related to rhetoric here in the United States.

“People say, ‘Oh, it’s New Zealand, it’s far away;’ the rhetoric isn’t far away at all. The language of invasion, which is all over the manifesto, was the same language used by the Pittsburgh killer in the synagogue. Invasion is also language that’s been used in political campaign ads by the President before the midterm elections. The language of replacement in the manifesto. We heard white supremacists chant ‘Jews will not replace us’ in Charlottesville. This is not happening in New Zealand. It’s happening everywhere and very, very close to home.”

On CNN, Berman talked with Muslim Advocates spokesman Farhana Khera, who said that she would go even further and blame Trump himself.

“I would go further to say why they are seeing inspiration from our own president is you have a president who, when he was a candidate, talked about banning Muslims from entering this country. As president, one of the first acts as a policy matter was to put in place that policy. The policy was cheered on by the white nationalist groups. Our president then called the neo-Nazi marchers very fine people. Now the shooter according to reports specifically invoked our president as an inspiration and said he was a symbol of the white identity movement.”

CNN also has this:

BERMAN: “The person giving a sign of allegiance to President Trump is the killer here. He called him a symbol of white identity. The language he uses in this manifesto is all about invaders. It is all about invaders, similar to the killer at the synagogue in Pittsburgh and language President Trump used in a campaign ad before the midterm election. The word invader means something to people around the world.”
KINZINGER: “For the president to say I’m concerned with illegal immigration –“
BERMAN: “He says invaders.”
KINZINGER: “Hold on. To say that and go to a guy willing to kill 50 people he may say, President Trump is my idol. That doesn’t put it on president Trump. I don’t know what a sick man that would kill 49 people innocently was thinking. I don’t have any idea what was in his mind. I know this. It cannot be connected. We cannot say what is it President Trump is doing that’s triggering these people? This is an evil man that made a decision to murder 49 people. And that is on him. Frankly, the evil in his heart.”

“That sense of zero sum game is what animates the ideology and literature and public and political amplification we are seeing in places like — for example, like in Australia which has a big sentiment there, but obviously Europe and the United States. It’s got to be toned down from the top.”

MSNBC’s Eddie Glaude Jr. worries: “There’s an epidemic of hatred and fear that’s engulfing the world, and we need to be mindful in our own rhetoric and our own actions how we’re pushing it.”

In his manifesto, the killer expresses hatred for capitalists, who he views as enemies of the environment. He hates free-trade, hates Trump’s policies, and views worker ownership of production as somewhat acceptable. Some of the quotes from his manifesto are anything but “right-wing.”

Globalized capitalist markets are the enemy of racial autonomists

An environmentally conscious and moral society will never be able to economically compete with a society based on ever increasing industrialization, urbanization, industrial output and population increase. The cheaper labour and ignorance of environmental health will always result in cheaper goods produced with less effort and inevitably result in control of the market.

A Europe of nature, culture and sustainable living practicing will not be able to ever compete in the global market.

Won’t your attack result in calls for the removal of gun rights from Whites in the United States?
Yes, that is the plan all along, you said you would fight to protect your rights and the constitution, well soon will come the time.

Won’t your attack result in calls for the removal of gun rights in the New Zealand?
The gun owners of New Zealand are a beaten, miserable bunch of baby boomers, who have long since given up the fight.When was the last time they won increased rights? Their loss was inevitable.I just accelerated things a bit.

Were/are you a socialist?

Were/are you a supporter of Donald Trump?

As a symbol of renewed white identity and common purpose? Sure. As a policy maker and leader? Dear god no.

Break the back of cheap labour

Whether that is by encouraging and pushing increases to the minimum wage; furthering the unionization of workers; increasing the native birthrate and thereby reducing the need for the importation of labour; increasing the rights of workers; pushing for the increase in automation or advancement of industrial labour replacement or any other tactic that is available.

As to the false claims about Trump’s racism regarding Charlottesville, please see here.

← On NewsMax TV: How Democrats are trying to make it costly for law-abiding citizens to own guns Civilian apparently cut short attack at Second Christchurch Mosque, only 7 died at that Mosque versus 41 at other one →