Why do Democrats keep pushing Universal Background Checks as a way to stop Mass Public Shootings? 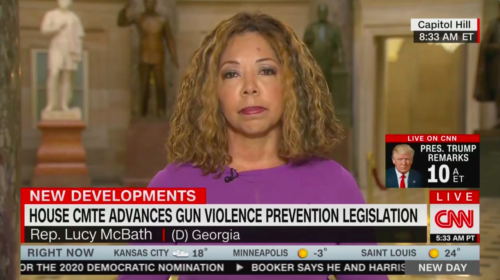 Rep. Lucy McBath (D-GA) pushes gun background checks on private transfers because “We Could Have Parkland at Any Time,” but there is not 1 mass public shooting this century that would have been stopped by this law. So why do gun controllers keep pushing it as a solution?

As usual, this interviewer on CNN refuses to ask a tough question. Why not ask McBath to name one mass public shooting, such as the Parkland tragedy that she refers to, where background checks on the private transfer of guns would have mattered? The reason is that there isn’t one mass public shooting this entire century that would have been stopped by this law being in effect.

JOHN BERMAN (Host): “This is the part of the conversation where no doubt everyone always says to you, ‘Yeah, it got through your committee, it might go through the Democratic House, but this has no chance of getting through the Senate.’ What do you say to them?”

LUCY McBATH: “I don’t believe that. I believe there are senators sitting on the Republican side that truly know we are doing the right thing. And I think going forward, people will have to be very aware what their constituency is going to be expecting of them. When numbers of people all around the country understand they could have a Parkland at any time in their communities, I think people are beginning to stand up and say, ‘This just makes sense.’ It’s common sense.”

← In the Las Vegas Review-Journal: "Guns on the agenda in Carson City" On DC's WMAL to discuss the Aurora mass public shooting at Henry Pratt Co. →