With threats of violence and the rising temperatures, Trump administration officials should be able to carry permitted concealed handguns

UPDATE: New Rasmussen Poll: “59% of all voters are concerned that those opposed to President Trump’s policies will resort to violence, with 33% who are Very Concerned”  During March of Obama’s second year in office, the same numbers were “53% and 28% respectively.”

ORIGINAL: We are about one year from when Representative Steve Scalise was severely wounded and other Republican Congressmen were shot at while they were at baseball practice. The shooter was a Bernie Sanders supporter.  Yet, if anything the temperature of the debate is even higher than it was last June. With Democrats constantly making calls about Republicans being Nazis (Google listed “Nazism” as the ideology of the California Republican Party), one worries that some people will believe those attacks and feel that they are justified in using violence. Comedian Kathy Griffin attacked Trump by holding up what looked like Trump’s bloody head.  But these aren’t just attacks on Republicans.  With Immigration and Customs Enforcement (ICE) employees being linked to Nazi. over 1,500 ICE employees have had their personal contact information released so that they can be harassed.

In 2016, there were 902 threatening incidents and communications against members of Congress. By 2017, the reports had more than doubled to about 2,000, according to the House Sergeant at Arms office. . . .

For example, Congressman Jason Lewis (R-MN) had threats made against three of his townhall scheduled in May.

When Sarah Sanders was asked to leave the restaurant this past weekend, she immediately did so without any argument. But still that was not enough for the restaurant owner and customers:

“Once Sarah and her family left, of course Sarah was asked to please vacate, Sarah and her husband just went home. They had sort of had enough. But the rest of her family went across the street to a different restaurant.

“The owner of the Red Hen — nobody’s told this — then followed them across the street, called people, and organized a protest yelling and screaming at them from outside the other restaurant and creating this scene,” he said. . . .

A discussion of what to do was offered in today’s Washington Examiner:

Facing a new wave of potentially dangerous threats, called for by a top Democratic lawmaker, legal and gun experts are calling on top Trump aides to get their concealed carry permit and back it up with a pistol.

“There are simply not enough police in D.C. or Virginia or Maryland to protect all Trump officials at their homes and when they go out to restaurants. Getting a concealed handgun permit would be helpful to protect themselves and their family,” said John R. Lott Jr., president of the influential Crime Prevention Research Center.

“High level officials in the Trump administration, especially if their faces are likely to be recognized by many in the public as a result of appearances on TV, might want to consider applying for a license to carry a concealed weapon in the District of Columbia, and/or other states they frequent, in view of the call by Rep. Maxine Waters for the public to ‘absolutely harass’ these officials in public places, and other recent events indicating the increased danger they are in,” added public interest law professor John Banzhaf. . . . .

One big problem with this solution is that people aren’t allowed to carry on Federal government property. Legislation would be needed to fix this.

Of course, there are more concerns of violence and harassment. Look also at the recent Tweets by Peter Fonda and Tom Arnold. 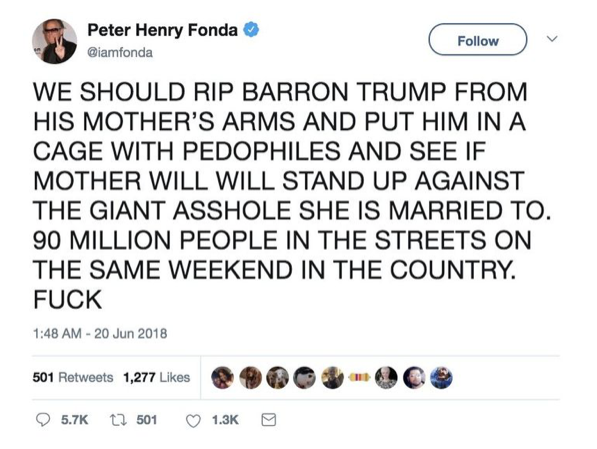 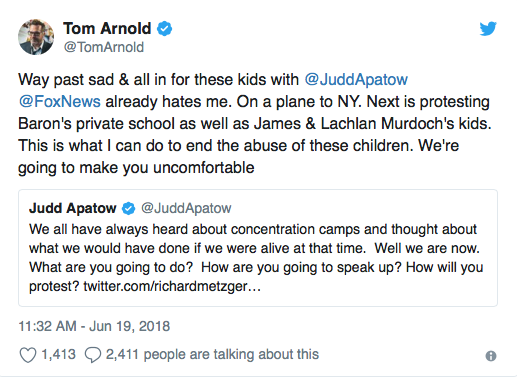 Even Trump’s 4-year-old granddaughter was threatened.

Others such as Congressman Jason Lewis (R-MN) have had protestors target his home and neighbors were sufficiently rattled to call the police. DHS Secretary Kirstjen Nielsen also faced protests at her home and was recently jeered when she was eating at a Mexican restaurant.  Florida Attorney General Pam Bondi was accosted by men getting right up to her and yelling obscenities in her face at a movie theater.

“The video they are choosing to share is of the least aggressive portion of the attack that transpired after police arrived to control the scene. What they are not sharing publicly are several previous encounters involving large men getting in the Attorney General’s face, spitting and blocking her exit,” the spokesman, Whitney Ray, said in an emailed statement. “The Attorney General tried to have a conversation with these individuals, however, when it became abundantly clear that they were not interested in a constructive dialog but were only there to cause a scene, the attorney general tried to leave the volatile scene. . . .

Bondi was able to wait until police arrived on the scene, but that might not always be an option.

You have had Madonna talk about her thoughts of blowing up the White House.

An explanation for why politics has become less civil is available here.