Last Thursday, the District of Columbia decided not to appeal a decision by the DC federal appeals court that declared DC’s concealed carry law unconstitutional.  DC had asked the entire DC federal appeals court for an en banc review of that decision, but despite a large Democratic majority, the entire DC federal appeals court unanimously let that decision stand.  Gun control advocates are obviously thankful that DC “took one for the team” and didn’t appeal this case to the US Supreme Court.  The last thing that they wanted was another District of Columbia v. Heller (2008) decision, whereby the Supreme Court struck down DC’s handgun ban and later applied the precedent to strike down bans in places such as Chicago.

As we have previously noted, prohibiting concealed handguns within 1,000 feet of a school can in some states essentially amount to a concealed carry ban.  Technically, DC allows permitted concealed carry, but the law is written in such a way that it would ban permit holders from carrying in virtually the entire District.  Even the 124 people who are legally permitted to carry are really currently banned from carrying virtually everywhere.  The relevant text of the law (§ 22–4502.01) is in the enhanced penalty section and is available here.

(a) All areas within, 1000 feet of an appropriately identified public or private day care center, elementary school, vocational school, secondary school, college, junior college, or university, or any public swimming pool, playground, video arcade, youth center, or public library, or in and around public housing as defined in section 3(1) of the United States Housing Act of 1937, approved August 22, 1974 (88 Stat. 654; 42 U.S.C. § 1437a(b)), the development or administration of which is assisted by the United States Department of Housing and Urban Development, or in or around housing that is owned, operated, or financially assisted by the District of Columbia Housing Authority, or an event sponsored by any of the above entities shall be declared a gun free zone. For the purposes of this subsection, the term “appropriately identified” means that there is a sign that identifies the building or area as a gun free zone. . . .

(c) The provisions of this section shall not apply to a person legally licensed to carry a firearm in the District of Columbia who lives or works within 1000 feet of a gun free zone . . . .

The figure below shows that it’s impossible to go more than a few blocks in DC with a permitted concealed handgun unless you want to take the risk that any violation of law could result in very severe penalties. And the figure doesn’t even include day care centers, video arcades, youth centers, playgrounds, or public housing.  The most likely interpretation of the law is that you can carry in gun-free zones that include your home or business, but not in other gun-free zones that are spread across the district. If Congress passes a concealed handgun reciprocity bill this session, this part of DC’s law would ban anyone from being able to carry their permitted concealed handgun within the district.

Someone we know contacted the DC police about this provision and received this response: “All I can really say on this is that there is a set of prohibited areas that apply to concealed carry license holders.” 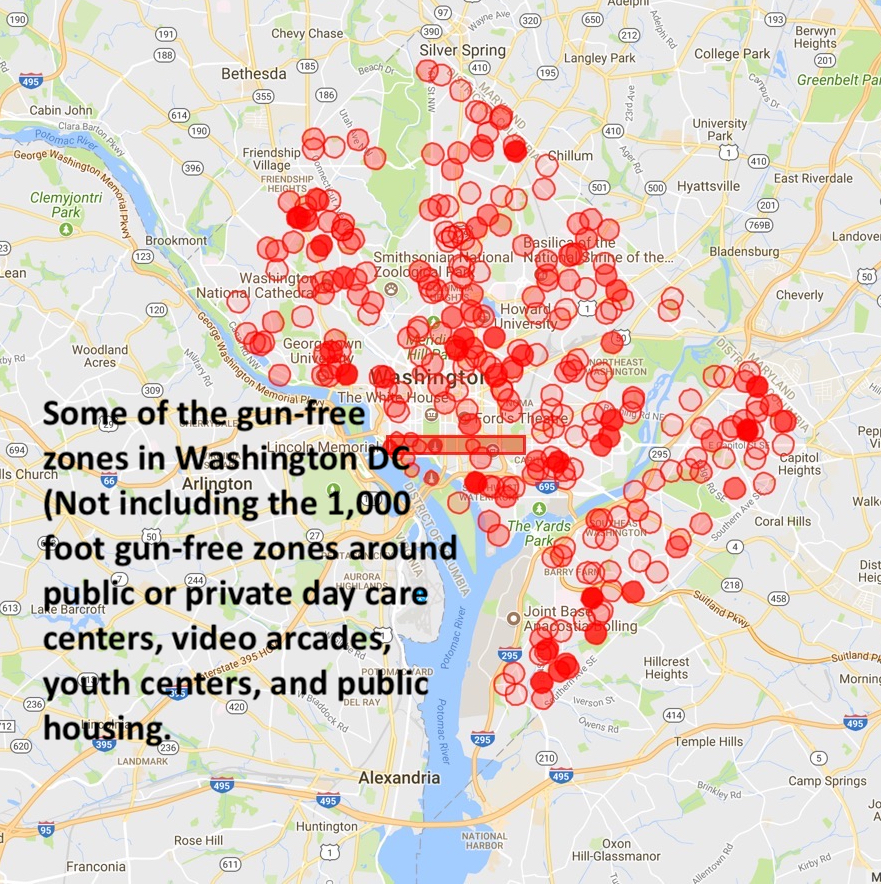 * One alternative way of reading Section C is that if you live or work within 1,000 feet of a gun-free zone, you are exempt from all gun-free zones, but if you don’t live within 1,000 feet, you are effectively banned from carrying.  Presumably, most would argue that interpretation is nonsensical.  But it is a possibility given how poorly written the law is.

Nelson Lund, a professor at George Mason University’s Antonin Scalia Law School, said he too would be wary of carrying a gun in the city.

The law “is so bafflingly drafted that I suppose it’s possible to read it as only an enhanced-penalty provision, but it’s awfully easy to read it differently too,” Mr. Lund said. “I don’t think I would want to exercise my rights under the Second Amendment while that provision is sitting there like that.”

Whatever the interpretation of the gun-free zones, analysts said, another part of the law has a long list of places where carrying is illegal, including city office buildings; the building, grounds and parking lots of schools; public transportation; hospitals; any place where alcohol is served; sports arenas; and the National Mall and other federal property. . . .

. . . Emily Miller, who chronicled her ordeal through the permitting process to own a firearm in the city in The Washington Times and later in her book “Emily Gets Her Gun,” said she doesn’t trust that assurance.

The D.C. Council “wrote a carry law that makes me study a map every time I move 10 feet,” said Ms. Miller. “Obviously, their intent was to make it as hard as possible for those of us who have carry permits to legally carry our guns in [the District] for self-defense. The criminals roam freely and don’t abide by the absurd carry restrictions, so those of us who carry guns for self-defense should be able to do so as well.” . . .

“All I can really say on this is that there is a set of prohibited areas that apply to concealed carry license holders.”