The left-wing Pacific Standard magazine has a very one-sided piece attacking Dr. John Lott. Lott spent 45 minutes talking to Peter Moskowitz, the author of the Pacific Standard article, before doing a debate on gun control at Baylor University. Below are some quotes from the article along with responses to those claims.

Pacific Standard  (PS): But researchers told me their qualms with Lott originate not in the field of politics, but basic scientific method. Several pointed out that concealed-carry laws tend to be passed after a spike in violent crime, and that many of the states Lott researched for his 1997 paper passed laws right after the crack epidemic. But, as researchers have pointed out, most concealed-carry permits are issued to white men outside of urban areas, so Lott was measuring two separate trends—an increase in violent crime associated with the crack epidemic in urban areas, and an increase in concealed-carry permits in rural areas—and then concluding they influenced each other. Lott did discuss the crack epidemic in a footnote in 1997, and the rural-urban issue in later research that appeared in the influential American Economic Review, but he continued defending his position long after the scholarly consensus rejected it.

One of Ayres and Donohue’s greatest concerns is the apparent failure of previous research to account for the differential geographic impact of cocaine on crime. Lott’s book (and the Lott and Mustard paper) reported that including price data for cocaine did not alter the results. Using yearly county-level pricing data (as opposed to short-run changes in prices) has the advantage of picking up cost but not demand differences between coun- ties, thus measuring the differences in availability across counties. Research conducted by Steve Bronars and John Lott examined the crime rates for neighboring counties . . . on either side of a state border. When the counties adopting the law experienced a drop in violent crime, neighboring counties directly on the other side of the border without right-to-carry laws experienced an increase. . . . Ayres and Donohue argue that different parts of the country may have experienced differential impacts from the crack epidemic. Yet, if there are two urban counties next to each other, how can the crack cocaine hypothesis explain why one urban county faces a crime increase from drugs, when the neighbor- ing urban county is experiencing a drop? Such isolation would be particularly surprising as criminals can easily move between these counties. . . . Even though Lott gave Ayres and Donohue the cocaine price data from 1977 to 1992, they have never reported using it. —Florenz Plassmann and John Whitley, Stanford Law Review, 2003

Since this paper by 2003, Lott has continued to examine the impact of cocaine/crack on crime rates. For example, Lott examined this in the third edition of More Guns, Less Crime that was published in 2010. 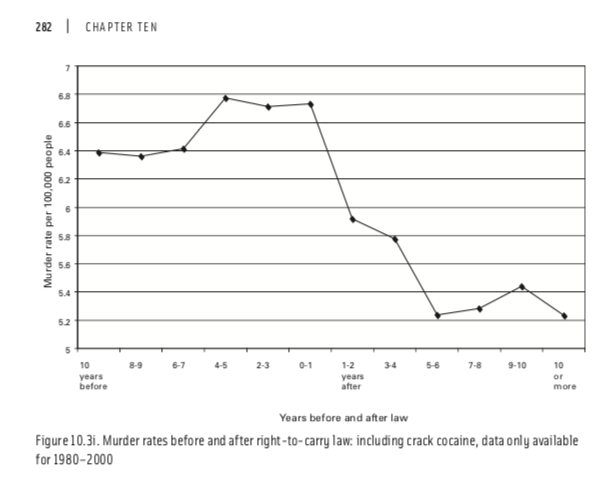 The point is that not only did Lott’s work account for the impact of cocaine, it didn’t effect alter the conclusion that right-t0-carry laws reduce crime.

PS: “He’s able to find things in data that most people don’t,” says Daniel Webster, a professor of health policy at the Johns Hopkins Bloomberg School of Public Health . . .

Yet, the vast majority of the peer-reviewed research supports Lott’s work (see here).

PS: Other researchers have found it problematic that Lott’s landmark 1997 paper depended on the state of Florida and incorporated crime data he collected from police departments on his own, as opposed to relying solely on data from the Federal Bureau of Investigation. If you take out Florida, Lott’s claimed reductions in crime become much less dramatic.

The results from Black and Nagin not only removed Florida, they removed 87 percent of the sample because they removed Florida AND all counties with less than 100,000 people in them. Even then and also looking at just the before and after averages, which Lott explains are very misleading, the results still showed a statistically significant drop in overall violent crime and two of the four violent crime categories (murder and aggravated assault). If you look at before and after trends, all the results are very statistically significant and very large.

PS: In the four years immediately following the conclusion of Lott’s 1997 study, 14 more jurisdictions passed concealed-carry laws. Ian Ayres, a lawyer and economist at Yale Law School, and Stanford Law School professor John Donohue, both of whom have published extensively on gun control, jointly wrote a 106-page takedown of Lott’s work in 2002. They decided to add those 14 jurisdictions to Lott’s models, and found that, in every jurisdiction, all categories of crime increased after concealed-carry laws were passed.

Here is a paper by Florenz Plassmann and John Whitley in the same Stanford Law Review that explains what is wrong with the Ayres and Donohue claims, but somehow Pacific Standard ignores this paper.

PS: David Hemenway, a professor of health policy at Harvard, found that, if you increase the unemployment rates in Lott’s models, homicides drop dramatically—the opposite of what research on gun violence and unemployment shows. And if you reduce the number of black women age 40 to 49 in Lott’s models by 1 percent, homicides drop by 59 percent and rapes increase by 74 percent. Hemenway argued that such massive effects from such a tiny change in just one demographic suggest Lott’s model is “no good.”

This discussion gets what was found in the original research backwards and wrong.  Here is a discussion that is in all three editions of More Guns, Less Crime, but the author apparently couldn’t find it.

PS: These researchers hold the majority opinion. . . . Seeing Lott slouching in an uncomfortable, shiny lounge chair at Baylor made me wonder why he does this—when so many of his peers say he’s wrong, when he’s not being given obscene amounts of money for his work, when he’s been essentially banished from academia, pushed to self-publishing and creating fake identities to advance his research.

Not so. See surveys of researchers here and here.

Other points raised by the Pacific Standard are discussed in other posts see here.