CPRC corrects CDC coding error, reducing the official number of accidental gun deaths in the US by 100 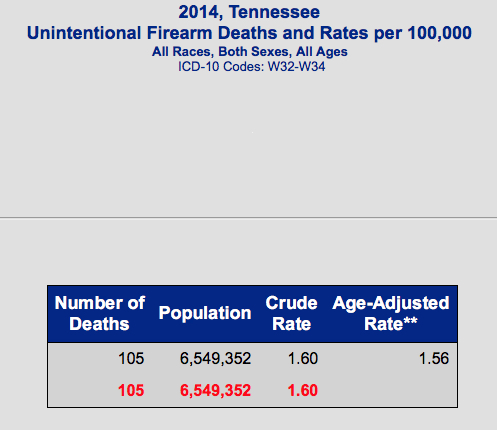 Rather than the number of accidental gun deaths in Tennessee increasing from 19 in 2013 to 105 in 2014, the actual number had actually declined to 5.  The total number of accidental deaths last year is thus 486, not 586.  While the CDC has acknowledged their mistake, they have yet to correct the numbers reported on their website.  Dr. Lott alerted the CDC to this problem in an email and then telephone exchange immediately after their website had posted the numbers.  From Guns.com:

A “coding error” caused the dramatic spike observed in Tennessee’s accidental gunshot death reports for 2014, according to the Centers for Disease Control website.

But CDC health officials wouldn’t even know about the mistake if Dr. John Lott, economist and author of “The War on Guns,” hadn’t brought it to their attention.

“I’m responsible for finding that out,” he told Guns.com during an interview Monday. “No other place in the south, or in the whole country, had this big increase in accidental deaths.”

Lott founded the Crime Prevention Research Center and is a favorite among gun rights group for his research linking lower crime rates to concealed carry laws. Gun control advocates pan his expertise and remain critical of his research methodology, featured in other best-selling books “More Guns, Less Crime” and  “The Bias Against Guns,” among others.

The original data, released last month, reportedly showed Tennessee’s accidental firearm fatalities jumped from ninth in the nation in 2013 to the number one spot a year later. Some 105 people died in accidental shootings in 2014 compared with 19 the year before, according to the CDC. . . .

In a broader context, Lott said the CDC and FBI established national reporting standards to avoid this sort of error, but nothing is fool proof — or immune to political agendas.

“There’s places where politics can interfere with this,” he said. “During the 1980s, there were a number of years when Illinois just refused to properly record crime numbers, so there is data missing. So is it perfect? No, but 98 to 99 percent of the time, they do a good job.”

Lott didn’t speculate on any perceived motive behind Tennessee’s over-reporting error and said it could be an innocent mistake. . . .

Here is a copy of the initial email exchange that I had with the CDC in January.  There was then a telephone call where I went into the problem with the sudden massive increase accidental gun deaths in Tennessee between 2013 and 2014 and how the number in 2014 was impossibly large compared to other states. 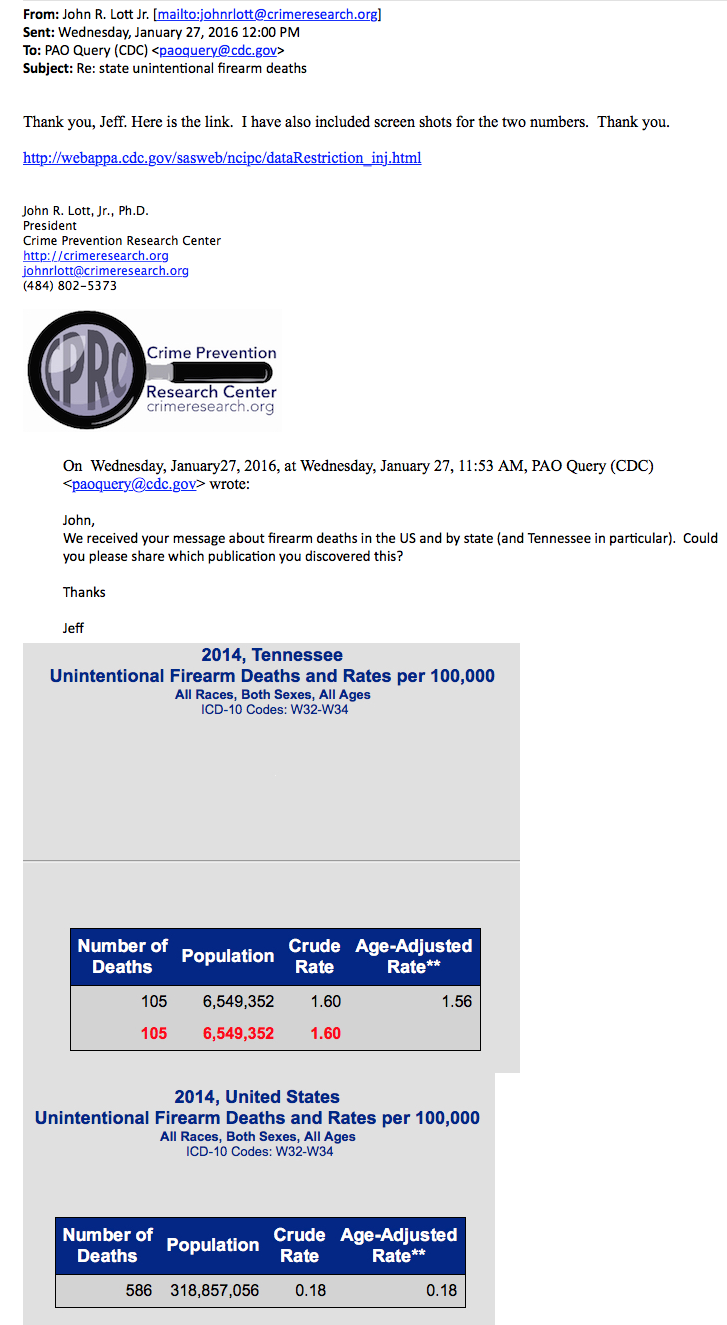 ← CPRC on Bill Martinez to discuss Hillary Clinton's proposals on gun control CPRC at the Heritage Foundation: "The Right to Arms and the War on Guns" →