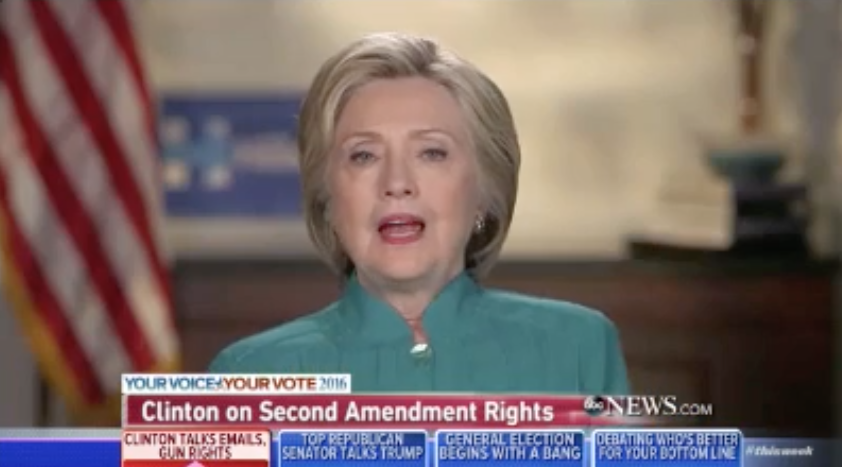 I know you reject that. But I — but I want to ask you a specific question.

Do you believe that an individual’s right to bear arms is a constitutional right, that it’s not linked to service in a militia?

Clinton: I think that for most of our history, there was a nuanced reading of the Second Amendment until the decision by the late Justice Scalia and there was no argument until then that localities and states and the federal government had a right, as we do with every amendment, to impose reasonable regulation.

So I believe we can have common sense gun safety measures consistent with the Second Amendment, and, in fact, what I have proposed is supported by 90 percent of the American people and more than 75 percent of responsible gun owners.

So that is exactly what I think is constitutionally permissible.

And once again, you have Donald Trump just making outright fabrications, accusing me of something that is absolutely untrue. But I’m going to continue to speak out for comprehensive background checks, closing the gun show loopholes, closing the online loophole, closing the so-called Charleston loophole, reversing the bill that Senator Sanders voted for and I voted against, giving immunity from liability to gun makers and sellers. I think all of that can and should be done and it is, in my view, consistent with the “Constitution.”

Stephanopoulos: And the “Heller” decision also does say there can be some restrictions.

But that’s not what I asked.

I said do you believe that their conclusion that an individual’s right to bear arms is a constitutional right?

Clinton: If it is a constitutional right, then it, like every other constitutional right, is subject to reasonable regulation. And what people have done with that decision is to take it as far as they possibly can and reject what has been our history from the very beginning of the republic, where some of the earliest laws that were passed were about firearms. . . .

There were many factual mistakes in Clinton’s discussion.

For a discussion of her claim that 90% support the gun laws she wants see here.

On Clintons frequently repeated false statistic that gun violence in America claims the lives of “33,000 people a year.”  In 2014, there were 21,334 firearm suicides, 586 accidental gun deaths, and 8,214 gun murders.  Clinton gets to the 33,000 number by adding in roughly 3,000 justifiable homicides by police and civilians.

Moreover, 71 percent of these 30,134 deaths are suicides. In light of Clinton’s support for legalizing assisted suicide, it is strange for her not to make a clear distinction between suicides and murders.  Research continually shows that banning guns won’t prevent suicides — there are simply too many easy ways to kill oneself.  In Japan, which has a suicide rate that is 54 percent higher than the U.S. rate, many people take their lives by stepping in front of trains.

CPRC at National Review: “On Guns, Clinton Runs Both Left and Right, Depending on Her Audience”