CPRC in the News: Washington Post, Christian Science Monitor, Sean Hannity, Cato Institute and many others 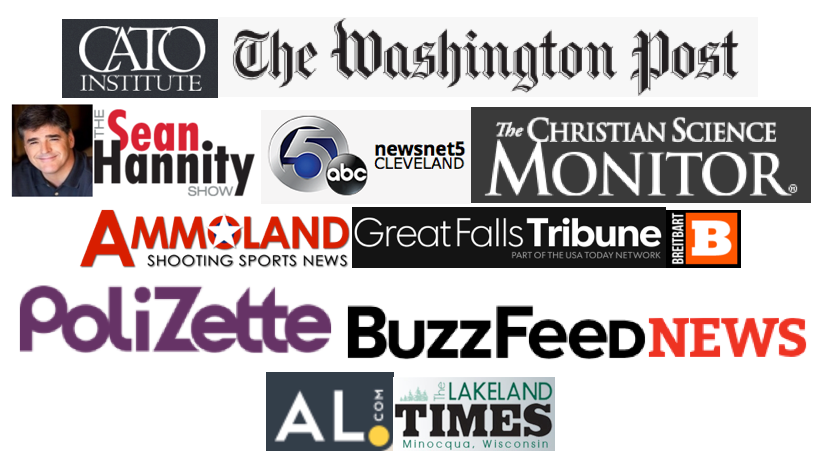 Rodecker pointed  to the latest Crime Prevention Research Center report that shows that the number of permits issued in the U.S. has grown more than 15% in the past year. . . .

Details are emerging about the Orlando Pulse Massacre.  It is clear that some of the first impressions were false.

First, there was not any initial exchange of fire inside of the club.  Officers did not fire at the murderer in the club, or he at them, until the last few minutes, three hours later, when SWAT officers broke into the bathrooms through a wall.

There was an initial exchange of gunfire, but it was outside of the club.  The off duty police officer/security officer quickly disengaged as the murderer entered the club while firing.  It is precisely the scenario that John Lott has often predicted.  If a security officer is known, a person planning a mass killing will determine a way to take them out with a surprise attack, find a way to bypass them, or avoid them. . . .

In only two of those cases did an armed civilian stop or slow the shooter, compared to five times out of the 17 incidents that took place in non-gun-free zones. A report released by the Crime Prevention Research Center in 2014 showed similar results, reporting that 92 percent of mass public shootings between January 2009 and July 2014 took place in gun-free zones.

And while there are a number of contributing factors for the locations of mass shootings there is evidence to support the fact that shooters do prefer gun-free zones. One year ago today, Dylan Roof, the South Carolina church shooter, initially planned to attack the College of Charleston before changing his mind due to the presence of armed guards at the college. Similarly, James Holmes, the Aurora movie theater shooter, decided not to attack an airport for similar reasons, and chose to attack the only movie theater out of the seven in his area that banned concealed handguns. . . .

So what are the solutions? Several groups including the Libertarians have proposed getting rid of “gun-free zones.” John Lott, noted author of “More Guns, Less Crime,” pointed out that in the killings of 12 movie-goers in Aurora, Colo., the suspect James Holmes had a choice of seven theater complexes within a 20-minute drive of his home. The theater Holmes chose happened to be the only one with a sign saying it banned concealed-handgun permits. All the other theaters allowed the four percent of Colorado adults with permits to enter with their weapons.

More proposals, similar to Australia’s buyback system, haven’t worked. Hillary Clinton has been pushing this proposal but many point out that in Victoria state, the year after the buyback program, firearms homicides tripled and within two years, Australian armed robberies rose some 73 percent and kidnappings by 38 percent. . . .

The horrific massacre at the Pulse Orlando nightclub has prompted calls for new restrictions on firearms. Those calls are understandable—fight mass murder by restricting some of the tools of mass murder, the thinking goes—but would such restrictions really reduce violent crime? Or, in a country with a robust black market, would gun restrictions merely constrain the lawful, giving violent criminals greater opportunity for mayhem?

To answer that question, researchers John Lott Jr. and Gary Mauser decided to ask the experts. They surveyed fellow academics who published empirical research on guns and violent crime in peer-reviewed academic journals over roughly the last 15 years. Specifically, Lott and Mauser asked about their perceptions of legal firearms possession’s associations with crime and suicide, and the effects of gun-free zones (which Pulse apparently was required to be, under Florida law) and concealed carry laws.

The respondents can be divided into two groups: economists (many of whom act as applied statisticians) and criminologists. The two groups differ in an important way: economists are much more mindful that policy changes can affect incentives and expectations. This likely explains the difference between the groups’ responses. Economists were highly skeptical of the idea that greater restrictions on legal gun ownership would reduce violent crime, while criminologists were considerably more mixed, with a lean (that sometimes wasn’t statistically significant) toward skepticism. Importantly for the current gun control debate, neithergroup supported the notion that more restrictions would reduce violent crime. . . .

The empirical claims in this study — that rates of violent crime drop when states pass permissive concealed-carry laws — have been challenged by scholars. Several have even challenged the integrity of the author. Even so, “More Guns, Less Crime” is one of the most influential books on gun policy. An academic book filled with statistics rarely encapsulates the zeitgeist of a movement so perfectly.

The notion that guns make society safer is much-debated.John Lott is a primary proponent of the claim. A study by the Harvard T.H. Chan School of Public Health in 2015 polled 150 scientists who study gun violence and found that 84 percent disagree. . . .

Of course, there is a survey that indicates that those results are not particularly accurate.

Dr. John R. Lott Jr., founder and president of the Crime Prevention Research Center, agreed with Lynch’s assessment of the situation, saying that there was little the FBI could have done differently.

“It’s very hard to get in someone’s head and predict their actions,” Lott said, adding that just because someone is a Muslim, or says he hates the U.S., or says he supports the Islamic State, doesn’t mean he’s going to go and carry out a mass shooting himself. . . .

The U.S. Senate considered four pieces of gun control legislation on Tuesday — the GOP-controlled chamber struck all four down. Lott noted that even if these four bills had been passed and put into effect long before the Orlando shooting, they would not have stopped any of the United States’ mass shootings in the last couple of decades.

“Look, what they’re pushing doesn’t have anything to do with stopping any of these attacks from occurring,” Lott said. “Democrats push these regulations and use the crises to push gun control laws … and by making it more costly for law-abiding citizens to get guns.”

One thing that would make a difference, however, would be allowing law-abiding U.S. citizens to legally purchase and maintain guns.

“There is no way that the police, the government, or the military can protect citizens all the time,” Lott said, adding that most of these mass shootings occur in gun-free zones. “The difference between life and death is the faster you can get a gun on the scene, the faster you’ll be able to save more lives.” . . .

But some gun rights advocates say there is already plenty of research on gun injuries. John Lott of the Crime Prevention Research Center in Alexandria, Virginia, told BuzzFeed News that his next book, scheduled for release in August, will show that researchers are doing twice as much research on firearms today as they were in 1996, despite the CDC research blockade. . . .

Lott views the push for CDC funding as just a money grab by researchers biased against guns. “People are getting plenty of funding already from foundations,” he said, particularly those sponsored by billionaires Michael Bloomberg and George Soros. . . . .

Even if the higher number were true, they tell a misleading story. Indeed, between 2009 and 2015, when we were supposed to be in the throes of deadly gun violence, the U.S. ranked only 11th in the annual death rate from mass public shootings per capita, compared to Canada and European countries, and only 12th in the frequency of mass public shootings during that time compared to those same countries, according to John Lott’s Crime Prevention Research Center. . . .