CPRC on National Public Radio: Trying to discuss the problems with the Gun Violence Archive

National Public Radio did a report on the Gun Violence Archive, which collects cases of gun deaths and crimes.  But there is a reason we should rely on FBI and CDC data before we rely on what Bryant has put together.  You simply can’t use media reports to determine what happened in cases.  The FBI and CDC also has national standards that allow you to make sure that you are putting together similar cases.
The discussion on this show of defensive gun uses is not very useful.  NPR had Bryant make his point first, a partial discussion by John Lott, and then Bryant’s response.  Lott’s point wasn’t that all these cases aren’t reported to anyone.  Some aren’t, but what Lott had argued during the part of the interview that was edited out was two fold:

1) Media reports rarely cover cases where people use guns defensively.  If someone uses a gun defensively and the criminal runs away (as occurs in virtually all defensive gun uses), that is simply not going to be considered newsworthy even if it is reported to the newspaper.  If you believe media accounts actually get virtually all the defensive gun uses, you would have to believe that about 85% of the defensive gun uses end in the criminal being killed.  No one believes that.  It is just that those cases are more newsworthy than cases where the criminal is wounded.  Only a few percent of the cases seem to involve cases where no one is harmed.
2) There is no standard reporting for police even when they are told about DGUs.  There are no reporting forms for police.  Police do not report these cases to the FBI.  Justifiable homicides are in theory reported by the police to the FBI, but that data for civilians is even worse than it is for the police, and I suspect you have heard how horribly bad the police data is.

Bryant was inaccurate when he claimed that Lott said that concealed handgun laws in Chicago were responsible for the drop in violent crime after the law being in effect for just a month.  In fact, after the law had been in effect for a year-and-a-half Lott said “it is very doubtful that permitted concealed could have a significant impact on crime rates.” 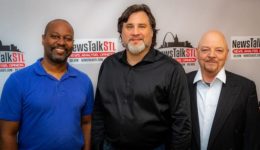 On St Louis’ Giant KLJY: Discussing California’s Recall Election and the Exploding Number of People on the Terror Watch List