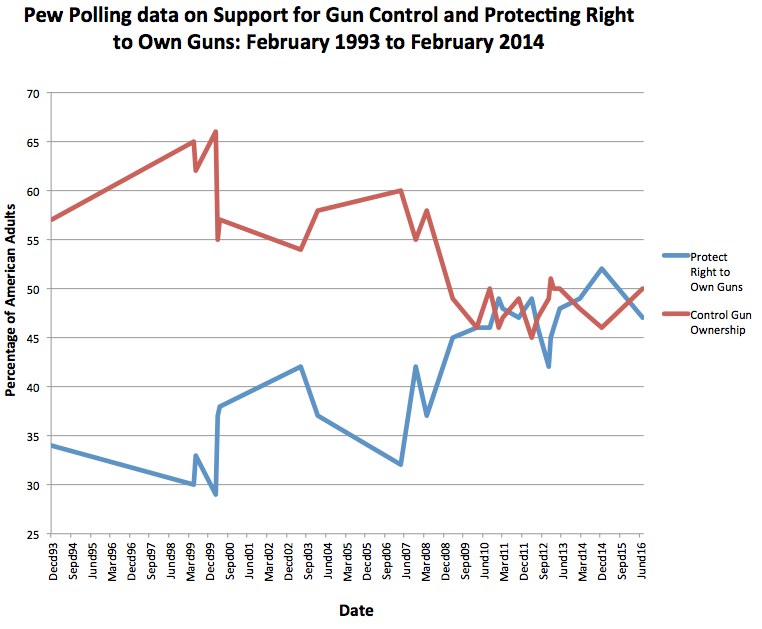 The newly released Pew Research Center survey shows that 47 percent of Americans want to “protect the right of Americans to own guns” versus 50 percent who support “control of gun ownership.”  It also supports other polls by Gallup and CNN that show that opposition to more gun control has been increasing over time.

The Gallup survey is consistent with this trend by showing more people think that guns make them safer.

The shift in views makes for grim reading for gun control advocates, who, according to Pew, have lost support among every demographic except Hispanics and liberal Democrats. City-dwellers, women, and blacks moved particularly hard toward a view put forth by pro-gun rights researcher John Lott: that an armed society is a polite society. . . .

Economist and columnist John Lott seems to have said it best in the title of his book, “More Guns, Less Crime.” Using state, county and city crime data, Mr. Lott argued that more guns and looser gun laws raise the cost of committing crime because a would-be criminal is more likely to encounter someone with the means to protect himself or herself, and thus the criminal is less likely to risk being injured or killed in the effort.
Americans seem to be increasingly embracing this idea. . . .