The shooting at the Mercy Fitzgerald Hospital in Darby, PA on Thursday evening was stopped by Dr. Lee Silverman, who happened to have his gun with him. Silverman critically wounded the attacker Richard Plotts after Plotts shot to death case worker Theresa Hunt. Hunt was apparently taking Plotts to his appointment when the shooting occurred. Silverman intervened before more people could be harmed and shot Plotts three times.

The Philadelphia Inquirer has a quote from someone at the hospital:

“There’s a sign on the door that says you have to check your weapons at the front,” she said, “But you can’t expect every crazy person to do that.”

Whether Silverman had a special exemption from the hospital to carry isn’t clear, but the benefit from him doing so convinced the local police chief to note:

. . . Yeadon Police Chief Donald Molineux said that “without a doubt, I believe the doctor saved lives.”

“Without that firearm, this guy (the patient) could have went out in the hallway and just walked down the offices until he ran out of ammunition,” the chief said. . . .

Both the police chief and the District Attorney had good reason for making their statements. Plotts apparently still had 39 rounds of ammunition on him when he was stopped.

It appears extremely likely that this doctor was one on the 870,000 concealed handgun permit holders in Pennsylvania (8.7 percent of the adult population).
Plotts apparently has “a lengthy history of gun arrests, violence and mental health problems.”
A detailed discussion is also available here.

UPDATE: It is clear that Plotts knew that the hospital was a gun-free zone; that Plotts “had a long criminal record, mostly for drug and weapons offenses, and was barred as a convicted felon from owning a weapon“; and that Silverman, who had a concealed handgun permit, will not be punished for having his gun with him at the hospital.

The hospital said Friday it was thankful for the “brave and difficult action” taken by Silverman and his colleagues. It said he remains a full member of the medical staff and “we look forward to Dr. Silverman’s return to serving patients at our hospital.” . . .

Something to think about: What do you do when a convicted felon who is banned from owning a gun is able to obtain a gun illegally and knowingly attacks people in a place where guns are banned? Are you going to put a police officer in every doctor’s office? More background checks wouldn’t have mattered. Plotts was already receiving psychiatric care. Possibly we could change the law so that Plotts could have been involuntarily committed, though liberals would strongly oppose that. In this case, fortunately there was a doctor who ignored the gun-free zone signs.

Here is a picture of Dr. Silverman. 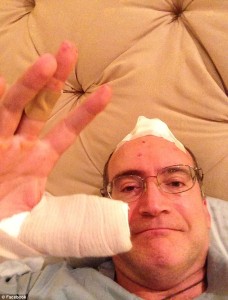