What set of “facts” about guns does Moms Demand Action point to first? 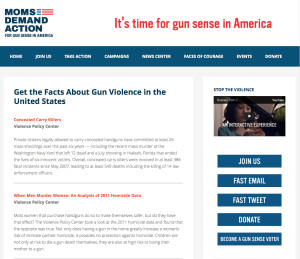 So how accurate is first set of “facts” about guns that Moms Demand Action points to? How about something that double or triple counts supposed deaths caused by concealed handgun permit holders? Many of these deaths clearly didn’t involve guns and many were self defense cases that should have been counted as benefits of concealed handguns, not costs.

Of course, this is only one example of Bloomberg’s groups stopping at nothing to push gun control.

Mayors Against Illegal Guns utterly false claim that academic publishing on firearm violence fell by 60% between 1996 and 2010 as a result of NRA backed amendment to the Federal budget.

Victor Blackwell, the host of CNN’s New Day, had this exchange with Shannon Watts on June 7th

Blackwell: I want to challenge you on something Shannon. Wayne LaPierre, executive director of the NRA, after Sandy Hook, said the only thing that stops a bad guy with a gun is a good guy with a gun. And I think, essentially [what guns rights proponents are saying] is [they] want their wives to be able to carry–to be the good person with the gun. Is there an example in school shootings or a mall shooting or these public facilities, where that has been wrong? Where a bad guy with a gun has been stopped in any other way or by a person other than a law enforcement officer with a gun or by killing himself?

Watts: This has never happened.

A list with links to some of those attacks that have been stopped is provided here in the sixth paragraph from the bottom.

Even on very simple factual claims it is amazing how inaccurate Bloomberg’s groups are. “It was really noteworthy in it’s the first time [the NRA] come out and said we’re not sure you should carry guns everywhere,” claims Shannon Watts, the president of Bloomberg’s Moms Demand Action. But Watts apparently doesn’t understand the distinction between open carrying long guns in restaurants and concealed carry handguns. Just because the NRA think that it is inappropriate to carry rifles openly into restaurants doesn’t mean that they believe Americans shouldn’t be able to carry permitted concealed handguns there.

Bloomberg’s Mayors Against Illegal Guns sponsored a poll that supposedly showed that 74 percent of NRA members “support background checks for all gun sales.” Unfortunately, that claim was also extremely misleading.

Of course, on June 1st, Bloomberg told David Gregory on Meet the Press: “We don’t want to end the Second Amendment. This is nothing about gun control, it is about just making sure three groups that 80% or 90% of the public thinks should not have guns don’t get them.” Yet, Bloomberg feels strongly enough about gun control to hijack it to make it the central discussion over Thanksgiving dinner and to make it part of Mother’s Day.