since 2007, at least 763 people have been killed in 579 shootings that did not involve self-defense.

The Times didn’t take our letter to the editor, but this is what we sent in:

CPRC at the Daily Caller: “The New York Times Keeps Getting Its Gun Facts Shockingly Wrong”

John Lott has a new op-ed at the Daily Caller:

Last week, a New York Times editorial shockingly claimed that American concealed handgun permit holders have been responsible for 763 non-self-defense deaths since 2007. The Times editorial cites these numbers as proof of the “myth of the vigilant citizen” and “foolhardy notion of quick-draw resistance.”

But the numbers they rely on from the Violence Policy Center are fatally flawed, quadruple counting legitimate self-defense cases as criminal murders and blaming suicides on permits when the suicides don’t even involve guns.

CPRC in Fox News: Police are extremely Law-abiding, but concealed handgun permit holders are even more so

. . . Gun control advocates just can’t accept the fact that concealed handgun permit holders are incredibly law-abiding.  The New York Times’ recent attack on permit holders is typical.  It is filled with triple-counting of legitimate self-defense cases. Murders or suicides by permit holders are blamed on guns, even when no gun was involved. 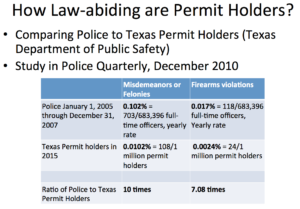 A recent study provides numbers on police convictions over a three-year period from January 1, 2005 through December 31, 2007.  This data was put together by doing news searches on media sources throughout the US.  There are two reasons that their method makes police look relatively more law-abiding than they actually are.…

The Violence Policy Center regularly puts out the claim that concealed handgun permit holders are a danger to themselves and others. Right now they claim that concealed handgun permits have been responsible for 636 deaths from the entire United States over almost seven years from May 2007 to March 2014. John Lott has pointed out errors in the VPC numbers for Florida, so here let’s take the errors in just one state Michigan.…

On the Bill Martinez Radio Show: The push for more gun control in Virginia